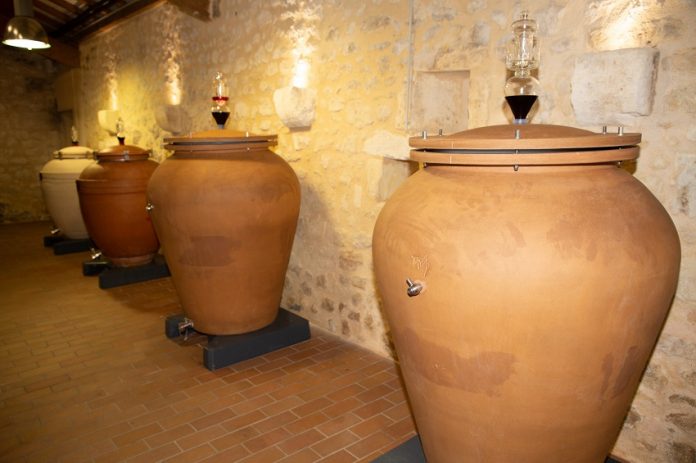 When we think of wine in ancient times, we often picture a large amphora. The amphora was used to transport liquids (including wine), but also for wine making. Long forgotten and replaced by wooden, concrete or stainless steel vats and barrels, the amphora is making a comeback in wineries all over the world, especially in France. Let’s discover together why amphoras are used again, and what are their advantages.

The amphora: the historical container of wine

An amphora is a container, shaped like a vase, with two ears as handles. It was originally used to store and move liquids. These containers were most of the time made of clay and contained about thirty liters.

A container for transportation

In ancient times, the amphora was the basic container for transporting liquids, wine being one of the first to be concerned. Amphorae dating back to the 4th millennium BC have been found in the regions of Georgia and Armenia, in the northern Caucasus.

And for the wine making

In addition to this role as a transport container, winegrowers soon began to use large amphorae to make their wines when they realized the perfect characteristics of terracotta for winemaking. Farmers and winemakers in Georgia sometimes even buried these amphorae to protect them. As this region was often invaded, this was the best way to protect and preserve the crops.

It is in this region of Georgia that winemaking was born, especially that of orange wine, the emblematic wine of this region.

Over the centuries, although amphorae remained for a long time the preferred container for wine, they gradually gave up their place, both for transport or storage, and for vinification.

The return of the amphora

For several centuries now, wine making has been done in wooden, concrete or stainless steel containers. Each of these containers has its advantages, its particularities and its qualities. Once the alcoholic fermentation is over, the wine is transferred to another container to be aged, once again in wooden, concrete or stainless steel tanks. This second choice of container depends on the region, the grape variety or the winemaker and his style.

But for some years now, the amphora has been making a comeback in some wineries, to vinify and age wines. Today, the term “amphora” covers a multitude of containers, of different sizes and shapes. They are all inspired by the traditional amphorae, and used to store and vinify wine.

Some winemakers have been inspired by ancestral Georgian know-how to use large amphorae (between 300 and 1000 liters) in their wineries to vinify their wines. This is called “terracotta vinification“. The method requires no intervention during the vinification, and therefore assumes perfectly healthy grapes. This vinification is very natural. It gives a rendering based on the fruit, without taste added by the container (unlike wood for example). Moreover, it benefits from an optimal oxygenation.

Why are they used today?

The large amphorae, used today, are more similar to the “dolias” of the Romans, or to the “qvevris” of Georgia, used at the time to vinify wine, and significantly larger and sometimes even buried (to use the Georgian technique).

The vinification of wine in amphora is possible for red and white wines, with whole grapes (with stems) or destemmed.

Amphorae are used a lot by biodynamic winegrowers. Indeed, these amphorae allow to limit the chemical inputs to the maximum.

The advantages of wine in amphora

One of the advantages of vinification in amphora is that it allows a so-called “soft” vinification. The wine is indeed vinified in these large containers, without any addition, and then extracted slowly and at length. This gives silky tannins, even with the most tannic grape varieties such as Mourvèdre or Malbec.

The amphora, perfect for wine

The vinification of wine in amphora also allows, in many cases, the ageing of the wine, as the vinification period can be long. At the end of the process, the wine is often ready to be consumed, only a few weeks after racking and bottling.

The terracotta that composes these amphoras is also very neutral, and does not give any taste to the wine (unlike wood for example). This material preserves the purity of expression of the grape varieties and the terroirs, without alteration. The vinification in amphora gives frank wines, quite straight, and of a great aromatic richness.

To summarize, there are three main factors, which make the amphora an ideal container to vinify wine:

The revival of amphora winemaking gives oenologists and other wine professionals a new means of expression. This opens up new possibilities for producers. In addition, the aspect of the amphorae, within a winery, also has a visual appeal for visitors.

Renowned for producing red wines with supple tannins and white maceration wines (the famous orange wine) that could be compared to the yellow wines of the Jura, the amphoras allow the production of fruity and pure wines, also offering a nice ageing potential.

Which wine to drink with a raclette or a fondue?