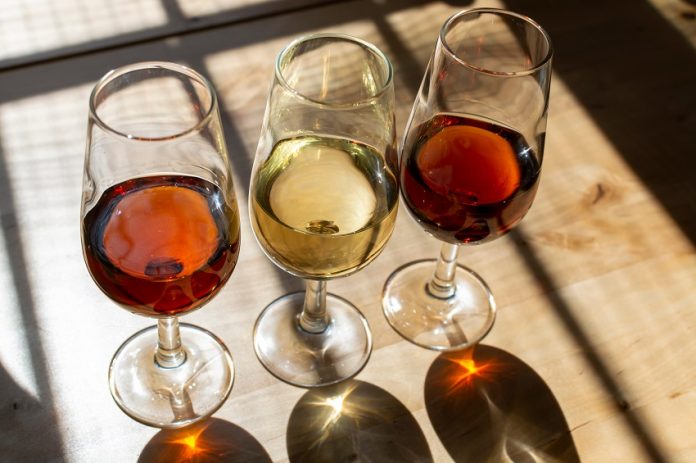 You may not be familiar with the term, but you have probably already tasted fortified wine. If we talk about Porto, or Pineau des Charentes, it rings a bell, right? This winemaking method, which appeared in the 13th century, is part of the history of many vineyards. And it has built the reputation of many wine regions in Europe. Let’s discover this particular type of wine, its specificities, as well as the most famous fortified wines in the world.

The origins of fortified wine

The word “fortified” refers to a very particular method of wine making. It is the act of stopping the fermentation, thus preserving the residual sugars of the wine. This creates sweet wines with a high alcohol level.

We find the first traces of fortified wine in the 13th century. It was originally produced around the Mediterranean, if we are to believe most of the literature of the time.

It is the French doctor and theologian Arnaud de Villeneuve who would have found this technique of fortification. This allowed to preserve the wines more easily during transportation.

This technique also spread in Portugal in the 17th century, for the same reasons. So that the wines could withstand the journeys in the holds of the ships.

The different types of fortified wine

The need for ripe, sweet grapes requires sufficient sunlight. Therefore, most of the natural sweet wines are produced in warm regions with a lot of sun.

The most common grape varieties used are grenache, maccabeu or muscat. This diversity of grape varieties means that natural sweet wines have a very different color depending on the region. It goes from pale white to amber red.

For natural sweet wines, it is the addition of a neutral alcohol that stops the fermentation of the grape must. This addition is done once the fermentation has already started. Then, when it comes to maturing, there are two ways to do it.

The first is to let the wine age in oak barrels, without direct contact with the air. This has the effect of preserving the floral and fruity aromas of the grapes, as well as their color.

The second method consists in raising the wine in contact with the air. This method is also called the oxidative method. This maturation gives specific aromas of nuts or leather. And the final color is more marked, dark.

Natural sweet wines are mainly consumed as an aperitif, or with sweet dishes, summer fruits, and chocolate desserts. They can also be enjoyed with foie gras or blue cheese.

Legend has it that this method was invented in Charente in the 16th century. A worker poured by mistake some new wine into a Cognac barrel. He let it ferment anyway, and the liqueur wine was born.

The maturation in barrel allows the beverage and its aromas to develop their full potential. The result is a fruity and rich wine.

Liqueur wines are often consumed as an aperitif, and can also accompany desserts.

Fortified wine in the world

Because of its Mediterranean origins, fortified wine is produced in most of the wine-producing countries that surround it.

Pineau des Charentes – This is the country’s most famous liqueur wine. It is produced from grape must blended with Cognac (the proportions being ¾ grape must to ¼ Cognac). The particularity of Pineau des Charentes is that the specifications of the appellation leaves producers quite free on the ageing time, the combinations between vintages, which gives quite strong differences depending on the domains.

Floc de Gascogne – Quite similar to Pineau des Charentes, Floc de Gascogne is blended with Armagnac, with a proportion of 2/3 must for 1/3 Armagnac. It is also a liqueur wine.

Macvin du Jura – Made from a blend of grape must and Jura spirit, it is then aged for a year in oak barrels. It results in a rather powerful, structured and complex wine.

These three liqueur wines all have AOC (Controlled Designation of Origin) status, to protect the know-how and the wine producing regions.

In general, most of the wine regions of France produce liqueur wines, without benefiting from an AOC. We can name the Ratafia in Champagne and Burgundy, the Rikiki of Beaujolais or the Cataroise of Béziers.

Sicilian Marsala – This is a liqueur wine produced in the region of Trapani on the west coast of Sicily that has a DOC (Italian equivalent of AOC). It is an 18° wine, which is aged between one and ten years, depending on the producer.

Porto is probably the best known of the natural sweet wines. It was created following the interruption of the importation of French wines in England, due to the embargo of the French on the English products in 1667. Following this episode, the English turned to the wines of their long-time ally, Portugal. To resist the shipping, Portuguese wines were fortified by adding grape spirit. Porto was born.

Madeira wine is the emblematic wine of the Portuguese island. It was invented during the first Atlantic crossings, in the 15th century, especially to resist the heat of the holds of the ships, which could reach 50°C when crossing the equator.

Nowadays, producers reproduce this heat artificially, because it accelerates the aging of the wines. And this would allow them to develop the strong oxidative aromas that Madeira wines are famous for.

Jeres, also called Xeres or Sherry – Emblematic natural sweet wine of Spain, it is produced in the city of Jeres de la Frontera, in Andalusia. The fortification of this wine takes place at the end of the fermentation process, which results in a rather dry wine, unlike other fortified wines.

Muscat of Samos – This natural sweet wine is produced on the island of Samos. It was very successful during the phylloxera epidemic in Europe, and was imported a lot to make up for the lack of wine. There are four varieties: Samos, Samos sweet wine, Samos Anthemis and Samos nectar.

There is a multitude of fortified wines, all very different from each other. We will choose a fortified wine more than another, especially according to our tastes and desires, as well as the moment when we will serve it. As these wines have a high level of alcohol, they can be kept for a long time, even after opening.

Wine screw caps: are they so bad for the wine?