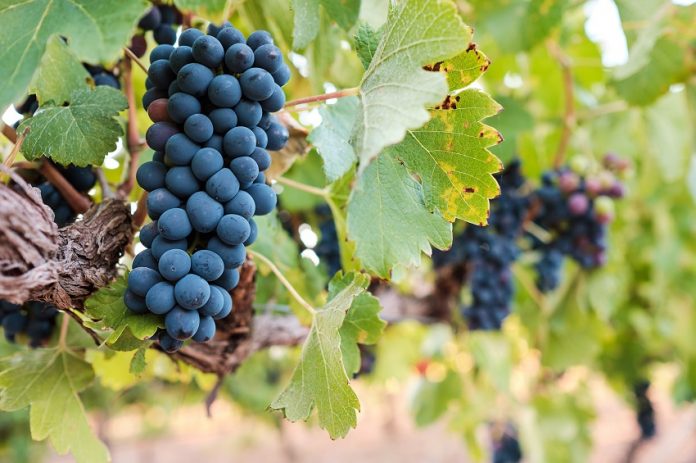 It is not the best known red grape variety, yet if you are a wine lover, you have surely already tasted it. Indeed, Mourvedre is a grape variety widely used in blends in Languedoc-Roussillon and the Rhône Valley. With its particular tannic structure and its own aromatic richness, it is a grape variety that only needs to be known and to develop in order to express its full potential.

Whether you’ve just heard its name, enjoyed its tannic taste, or didn’t know it existed until a few minutes ago, let’s discover this great red grape variety, and learn about its history and particularities.

The origins of Mourvedre

It is a black grape variety of Spanish origin, also called Monastrell in its original language. It is recognizable by its large, round, very serrated leaves.

Its origins can be traced back to the town of Morvedre (now called Sagonte) located near Valencia. In other regions, this variety is also called Mataró, the name of a Catalan town, where this variety also has its origins, according to other sources.

In its country of origin, the Mourvedre has developed over the centuries to become one of the dominant red grape varieties, especially in the regions mentioned above.

Its introduction in France would date from the 16th century. Pilgrims returning from the road to Saint-Jacques de Compostelle would have brought it back.

The Mourvedre in figures

In France, Mourvèdre is cultivated on a little less than 10,000 hectares, mainly in the Rhône Valley, Provence and Languedoc-Roussillon.

It is in Spain, its region of origin, that it is most present, with nearly 100,000 hectares of vineyards, mainly in the Valencia region and in Catalonia.

The Mourvedre in France and in the world

Mourvèdre grows especially in warm southern areas, favorable to its maturity.  In Spain, it is the king grape variety, where it is the second most cultivated in the country.

The Mourvedre in France

In France, this grape variety is especially exploited for prestigious vintages. It is mostly cultivated in Languedoc-Roussillon, Provence and the Rhone Valley.

Before the phylloxera crisis at the end of the 19th century, it was one of the dominant grape varieties in Provence. Following this episode, and the introduction of grafts, the Mourvedre, less resistant and less willing to be grafted, was gradually abandoned. After having lost some of its superbness, it has come back to the forefront for a few years in this region.

In Provence, the Mourvèdre is part of the grape varieties of several AOCs: Cassis, Côtes-de-Provence, Coteaux-d’Aix-en-Provence, and Coteaux-Varois. In Bandol, it constitutes at least 50% of the red blends, mainly alongside Grenache and Cinsault. It is in this region of Provence where it expresses itself best. It is even said that it “needs to see the sea”.

Mourvèdre is also widely used in the Rhone Valley, particularly in Châteauneuf-du-Pape. It brings complexity and good ageing potential to wines dominated by Syrah and Grenache.

The Mourvedre in the world

Outside Europe, Mourvedre is found mainly in California and Australia.

In Australia, it is mostly found in the regions of New South Wales, where it was imported in the 1880s. It is part of the famous GSM triptych (Grenache, Syrah, Mourvedre), grape varieties that are widely blended in this region. And grape varieties very much appreciated by the local consumers.

It came to California in the 1860s, via the great manufacturers of the time, eager to develop the culture of the vine in these regions of America.

Characteristics of the Mourvedre grape

Wines made from Mourvedre are mainly low in acidity. But they are known for their tannic structure and their aromatic richness. It is a grape variety that requires several years of ageing to develop its full range of fruity aromas, and which has a very late budding.

This grape variety also needs a lot of sunlight, and is therefore very often used for blending. It brings structure and complexity to the grape varieties with which it is combined. In most cases, it is blended with Syrah and Grenache. This blend gives supple wines, and affordable in their youth.

Global warming and rising temperatures mean that Mourvedre could, in the future, grow in more northerly regions than it does now.

Its main aromatic characteristics are pepper, truffle and black fruits.

Mourvedre also gives the wine aromas of spices and leather. This is why it is often mistaken for Cabernet Sauvignon in its youth, for these characteristics.

It expresses itself in the glass and gives great red wines to keep, guided by a solid tannic framework. It is a grape variety that also produces very good gastronomic rosé wines, with a dark, almost violet color.

How to taste the Mourvedre ?

Because of its tannic aspect, it is a grape variety that must be aerated a few hours before tasting. Indeed, we aerate it so that the aromas can develop and express all their flavors. The more the grape variety is cultivated in a temperate zone, the more aeration will be necessary.

Mourvèdre often produces wines that are quite high in alcohol. Therefore, the ideal serving temperature is around 16 or 17 degrees.

In terms of food and wine pairing, Mourvedre is a grape variety that should be associated with meaty dishes, with a lot of flavors, and with sauces. It is a rather wild grape variety, hence its perfect association with strong meats like game.

As for the rosés made from Mourvedre, they go perfectly with tapenade, seafood and fish.

Since 2002, Mourvèdre has had its own “Conservatory of the Mourvèdre grape variety”, to preserve its diversity and set up a genetic reservoir. This conservatory is located in the commune of St-Cyr, within the Bandol AOC. It is managed by the Var Chamber of Agriculture.

Why Do You Need to Aerate Wine?

Which wine to drink with a raclette or a fondue?