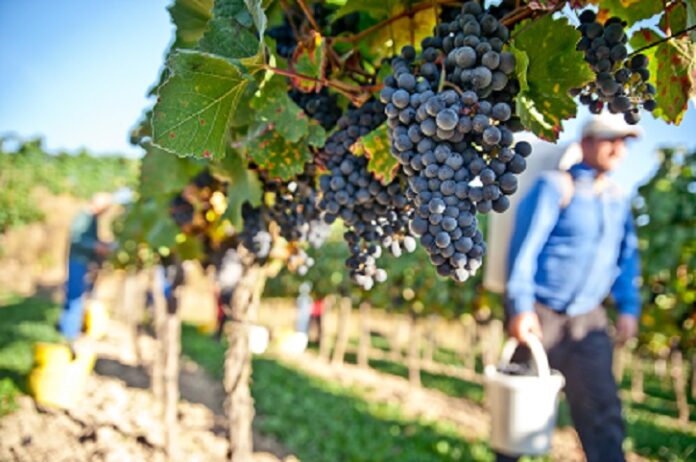 That’s it, the grapes are starting to show off their beautiful, definitive gowns, and the harvests can finally begin!

Dates of the harvests

In France, the harvests take place from the end of August to October. However, they tend to be increasingly early these last few years… #climatechange! Their duration depends mainly on the weather at this time of the year. They can last for more than a month when all conditions are favorable. But it also depends on the grape variety, some requiring more resources than others to reach full maturity. The Cabernet Sauvignon, for example, is one of the varieties that is harvested last.

The harvests take place when the grapes show satisfactory sugar levels. This ensures a balance with the other components, especially acids. The refractometer is a device used to measure the proper sugar content of the grapes. In fact, white grapes ripen before the reds, so they are usually harvested first. This is especially true since acidity is a particularly important parameter for dry white wines, as it is associated with freshness.

Therefore, the weather is also a fundamental element when determining the dates, as well as the duration of the harvests. Some weather episodes can be life-saving, others can ruin the harvests.

However, without going that far, the dates of the harvests are not the same according to the regions and the styles of wines produced there. Generally the harvests in cool regions (Champagne, Alsace) will take place later than in hot regions (South of France).

Use of a machine or hand harvests?

Well, it all depends on where you are in the world and what you want to do! Because harvesting manually or with a machine always has advantages and disadvantages. The machine will speed up harvesting, reducing production costs, especially in countries where manpower is not cheap. It can also be used at night, which in hot climates is a real advantage.

On the other hand, it cannot be used everywhere (steep vineyards) or for all styles of wine, especially those that require grapes to be harvested in whole bunches or have very specific rules. This is the case for example in Champagne, where only manual harvesting is allowed in order to limit color extraction as much as possible.

Be careful not to confuse these terms! The so-called “green” harvests take place before the classic harvests and allows, by cutting part of the bunches present on the vine, to concentrate the aromas of those that will remain. In other words, the quantity is reduced to increase quality. To learn more about green harvesting, read our article.

Late harvests take place as the name suggests later than usual. The result is a grape that is ” over-ripe “, i.e. with higher sugar levels and therefore with a higher alcoholic potential. These late harvests are particularly indicated if the aim is to produce a sweet wine (mellow or syrupy). It is also a mention that can be found on the label of some wines, especially wines from Alsace.

Once the grapes have been harvested, there is no time to lose, while remaining vigilant! It is very important to transport the grapes to the winery as gently and quickly as possible. The ambient temperature is a key element, the fruit must be protected from excessive heat that could affect the quality.

Oxygen is another key element. Sometimes desired, sometimes not, it must be perfectly controlled in order to preserve the freshness of the fruit, and especially to avoid unwanted oxidation. It will thus ensure a harmonious evolution of all the aromatic components. From the harvests to the tasting of the wine, it is really a very important element to be taken into account in order to enjoy all that wine has to offer.

The grape harvests brings people together! There is a whole folklore around this vineyard’s strong time, and it is good to remember that in other times the grape harvests were celebrated in all the local villages. It was a sign, in some civilizations, that the gods were merciful, but more importantly, it was a sign that the village would have enough resources to feed its inhabitants and thrive from its trade. We tend to forget all this with time, but fortunately some events still survive and are really attractive.

Each wine region has festivals dedicated to the grape harvests. Among these main celebrations are two of the most emblematic, but this list is not exhaustive, many great and beautiful events take place all over France and the world.

(Be careful, due to the exceptional situation related to Coronavirus these events can be cancelled. Please inquire beforehand).

Celebrating wine (or celebrating with wine!) is a great part of the French “Art de vivre“.

In Bordeaux: the “Ban des vendanges” in Saint-Emilion. The Ban represents the administrative authorization to harvest. It means that the harvests can begin on the date set. Organized by the Jurade de Saint-Emilion in traditional costumes, it is an opportunity to go back in time and to immerse into the tradition of the ancestors in a spirit of conviviality. Perhaps you will be honored as well?

In Burgundy: the legendary “Paulée de Meursault” celebrates the end of the harvests with a dinner where 800 guests are seated at the Château de Meursault. It is the last part of the “three glorious”, these three Burgundian events which aim to end the season with panache and conviviality. The two others being a dinner at the Clos de Vougeot with the Confrérie des Chevaliers des Tastevins, and the famous Hospices de Beaune auctions.

Beware these events are extremely popular!

What if you went dancing in the traditional “lagares” in Portugal? These large granite vats that look like basins, were and still are for some people used to tread/crush the grapes, and thus start the fermentation process to produce Porto. Beware however, this activity is very physical!

In the United States, there are many great festivals that bring together the different wineries, such as in the Paso Robles region, during the “Harvest Wine Weekend“, or in the beautiful region of Sonoma, where the “World Championship Grape Stompers” are held, a world championship where the grapes must be crushed as quickly as possible!

To sum up the grape harvests

The harvests represent a key moment in the life of a winery and for the regions that produce wine. It is the occasion to celebrate many festivities that represent for many an opportunity to bond over a common experience. For just as it is necessary to ensure the oxygenation of the wine, it is also necessary to ensure that the mind breathes. Just like wine, we become more open!

Well, Aveine does not yet offer this special function on its aerator: it’s just for wine…! But it can still contribute to it, hence the interest of celebrating the harvests with us!

What is a wine carafe and what is it used for?