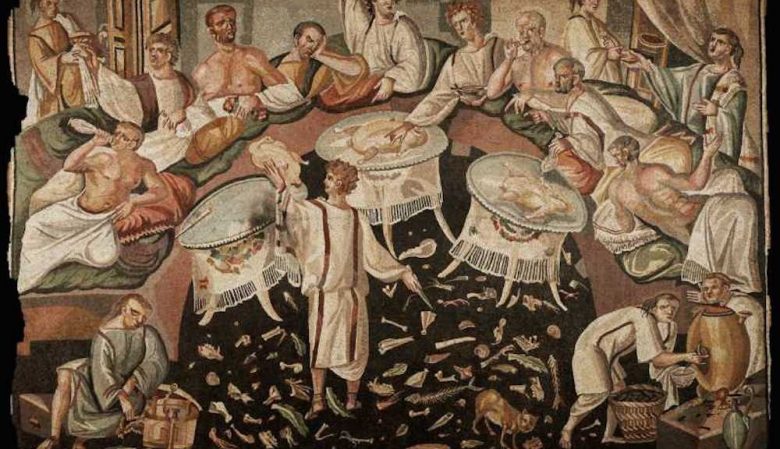 Guess what: In Ancient Rome, wine was a popular drink, and people already enjoyed grands crus. But wine consumption was very different from now. So how was wine consumed?

In Ancient Rome, wine is a basic necessity. Everyone has access to it. Moreover, in his agricultural treaty, Cato wishes to grant 260 liters of wine per year to any slave. We can therefore imagine that the consumption of urban dwellers is probably much higher. The administration also ensured that food, including wine, was always cheap. Thus, wine was accessible to all classes of the population.

People drink wine every day, at home. It always goes with bread. At banquets, men and women drink it during the meal. The guests drink wines of different qualities according to their social rank. People can also drink wine in taverns, where poor, freed slaves and prostitutes live side by side. Taverns were the favorite spots of the plebe, so drinking, fighting and riots were common.

We drink old wine and… cut it with water!

Even then, we were already enjoying the old grands crus. Depending on the wine, it could be kept between 5 and 25 years before drinking. The wine for everyday consumption was mixed with several ingredients to improve its taste. But one of the most important points about wine consumption in Roman times would shock us today: it was cut with water! This was the element that made it possible to distinguish civilized people from barbarian people. The barbarian people were considered incapable of managing their appetite for drunkenness, whereas civilized people showed foresight by cutting off their wine to mitigate its effects. It was also considered that not cutting your wine was dangerous for your health!

What were we drinking in Ancient Rome?

Many wines from the Roman period were in general sweet or white. On the one hand, we had the production of great wines, and on the other hand, a more local and less famous mass production. Three great wines stood out from the batch: Falerne, Cécum and Albanum. Their production was concentrated between Rome and Pompeii, a region where most of the high Roman society used to live. Rome was surrounded by mass vineyards to ensure the consumption of the population at the time (between 700,000 and 1 million inhabitants). The plebe drinks Lora and Vappa, low quality wines.

Wine was therefore a popular drink accessible to all classes of society in Ancient Rome. Cut with water, wines were already classified according to their qualities. And today, Italy is still renowned for its production of quality wine.

All about Clairette de Die