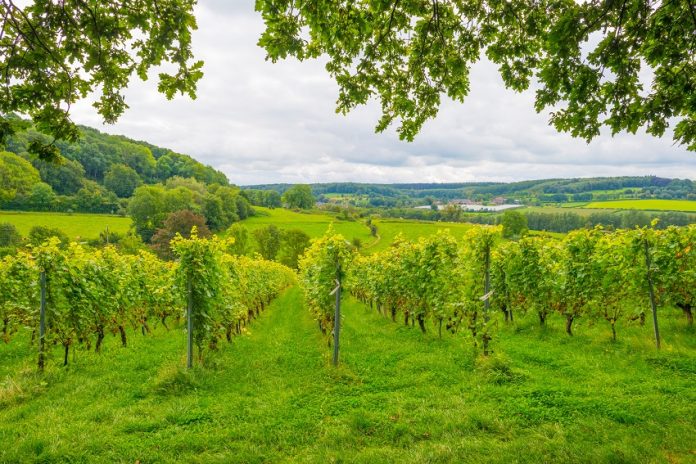 Belgium is often lauded for having great beer, chocolate and waffles but did you know that there is also a flourishing wine market in this small European country. Although less talked about than wine-making regions like France, Spain, and Italy, Belgium still has a lot to offer when it comes to wine.

The first record of grape growing in Belgium was in the 9th century in Wallonia.  Monks would practice viticulture, and the wine they would make was mainly for celebrations. They needed a clean beverage that would be safe to drink and not affect the water catchment areas and environment. The first owners of vineyards were the abbeys (housing and places where the monks resided). Later on, people started owning wine farms. For example, the Dukes of Burgundy had their vineyards in Brussels, Mons, Aarschot, Namur, and Louvain.

Nobody knows if any wine production happened before the 9th century because the region had thick forests that were later cleared for wine farming. The climatic conditions were also not the best for viniculture at the time. However, in France, vineyards existed as early as the 4th century as viticulture spread along the Rhine River. Some of the vineyards regions are Amay, Vivegnis, and Liège. The banks of the Meuse River also offered great slopes and climates for vineyard cultivation. South facing slopes ensure that the grapes have access to sunlight and warm currents.

As the centuries passed, more cities had vineyards. For example, by the 14th century, the cities with vineyards were Tongres, Tournai, Louvain, Brussels, Dinant, Ghent, Bruges, Thuin, Huy, Namur, Hal, and Dinant. Beer production was also improving, and due to including hops as an ingredient, the beverage could store for longer. By the 20th and 21st centuries, the wine industry in Belgium had grown.

The main wine regions in Belgium are Wallonia and Flanders. Wine from Flanders is called Vlaamse landwijn, and wine from Wallonia is Vin de pays des Jardins de Wallonie.

Wallonia is in the south and a third of the population of Belgium live here. The region has many castles and monasteries and tells a story of Belgium’s rich history. The burgeoning wine region has been in the spotlight lately as a growing region. There are approximately 115 vineyards here, which account for about half of Belgium’s total farms.

The wine farms in this region are located near rivers and forests that shield the vines from the frost. Due to the cold temperatures, Wallonia is a stellar location for white and sparkling wines. Wallonia has silty and sand silty soils that offer good minerals and drainage. All this is important in making the wine grapes flourish.

One interesting thing to note about this region is that they use hybrid vines such as Helios, Bacchus, Solaris, Limberger and Regent. They have high-quality Pinot Noir with characteristic flavors of dark fruits and berries.

This is the Dutch-speaking section of Belgium. Although it is not the largest region, it has the largest population. The area is relatively flat, and there is a small part of the North Sea. It is fertile and highly populated, and great for vines. The region contains sand and alluvial soils and is irrigated by many rivers and waterways. There are wide valleys and rough land as well. The soils are high in calcium and other minerals. Flanders has a wine appellation called “Vlaamse mousserende kwaliteitswijn” with great sparkling wines.

Belgium has five official Appellations d’origine contrôlées (AOCs) which is the certification of authenticity given to food, wine, and agricultural produce of different regions. As Belgium is a French-speaking region, the AOCs are similar to France’s. Belgium has 5 AOCs, and four are in Flanders. In Dutch, the three AOCs are Hagelandse wijn, Heuvellandse wijn and Haspengouwse wijn, and the French one is Gecontroleerde oorsprongsbenaming. The AOC for sparkling wine is Vlaamse mousserende kwaliteitswijn.

The wine industry in Belgium today

Today, Belgium produces wine for export, consumption and use in the home. About 90% of the wines produced in Belgium are white wines like Chardonnay. Other grape varieties here are Müller-Thurgau, Pinot Noir, Pinot Gris and Kerner.

The country exported $139M worth of wine in 2020 to destinations like the UK, France, Denmark, Luxembourg, and the Netherlands. The country imported $1.2B of wine from France. Spain, Germany, Netherlands, and Italy. According to Statista, Belgium’s wine revenue is expected to grow to $7.25B in 2022 while the production to 336.8 ML by 2025. In Belgium, still wine has the most significant consumption share, followed by sparkling and then fortified wine.

Taking a tour of some vineyards is one way to learn about this country’s wide array of wines. Most of the grapes are grown on south-facing slopes or near forests or rivers. The area under vineyards is 185 hectares.  You can plan wine tours in Wallonia to stop at 4 or 5 vineyards a day. However, make sure you call in advance for the winery to reserve. Many local companies offer winery visits and tours. Some of the vineyards to check out are;

The food and wine scene is vibrant, with many beer and wine fairs. You can also look for wine pairing dinners and sampling events in summer. One event to check out is the Namur Wine and Gastronomy Fair, where more than 100 wineries exhibit their wine.  Overall, Belgium is a wine region to watch.

The “other” wine regions of the USA

Wine glasses: from theory to application