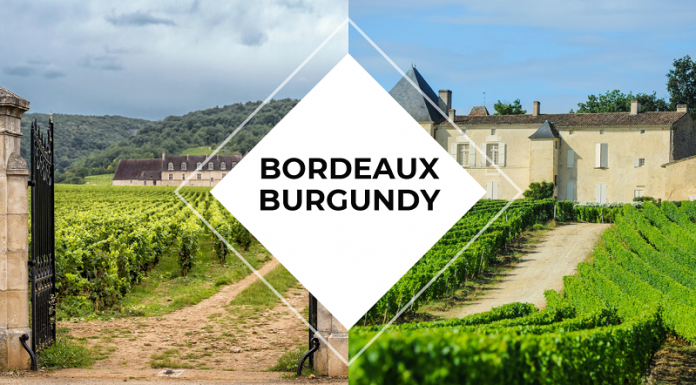 There are two regions in France that unleash passions in the world of great wines: Burgundy and Bordeaux. These two regions produce mythical wines, true legends that turn heads, fill cellars, and empty the bank accounts of winelovers! Pétrus, Yquem on one side, Romanée Conti, Clos de Vougeot on the other… It must be said that these regions have their fans… and also their detractors! Would one be better than the other? So we decided to take a closer look and highlight the differences (beyond the shape of their bottles) between the two major wine regions of France.

Bordeaux wines and Burgundy wines, what is the difference between them?

There is a tendency to oppose the regions of Bordeaux and Burgundy, which in a way can be a pity when only one should be retained, but which is a reality when we talk about style… Although sometimes, in blind tasting, differentiating one from the other could be more difficult than it seems! We will therefore evoke here some generalities and start from some preconceived ideas, which may be arguable.

We mention here the red wines of the two regions but you should know that Burgundy and Bordeaux also produce great white wines.

The wines of Bordeaux are associated with highly colored wines, with a concentrated tannic matter, a lot of aromatic intensity, and marked maturation in new barrels. The result is expressive, concentrated, tannic wines with great ageing potential. So much so that some of them appear to be austere during their young years (this is changing!) and often require significant aeration. This is no longer a problem today since Aveine exists!

Versus Burgundy, too clear?

The red wines of Burgundy are associated with lightly colored wines, with a thin tannic matter. The aromatic intensity is measured, with delicate red fruits and floral notes, with moderate barrel aging to preserve this harmony. These wines can be appreciated in their youth and some perform well with time. Here again, adequate aeration may be the key to revealing all the delicacy of Pinot Noir.

One of the reasons for these differences is the use of different grape varieties. Bordeaux uses Cabernet Sauvignon in a blend with other grape varieties. This grape has a thick skin and gives a lot of color and tannins. In Burgundy, the red grape used is Pinot Noir, which has a thin skin and gives little color and tannins. It could therefore be easy to differentiate one from the other just by the color! However, this is not always the case and it is particularly complicated with the evolved colors of old wines.

Although these two regions share common latitudes, the climate in Burgundy is continental and cool, allowing the Pinot Noir to develop without over-ripening. Bordeaux, with its proximity to the Atlantic Ocean and the warm Gulf Stream, has a moderate oceanic climate. This climate provides good ripeness for grape varieties that require more resources to complete their vegetative cycle. This is particularly crucial for Cabernet Sauvignon.

These differences in climate explain why we find Pinot Noir in Burgundy and Cabernet Sauvignon in Bordeaux.

The classifications of these regions differ in their hierarchies.

The scale of Crus and Grands Crus Classés

Differences in terms: Climats and Châteaux, parcel-based vintages and blending

Burgundy is based on the work of the monks who, as early as the Middle Ages, listed all the different parcels. They quickly realized the distinctive character of the grapes on this or that parcel. In fact, the different sites produce significantly different wines, even though the same grape variety is used. This difference led to the creation of the famous “climats” of Burgundy. Today, this parcelization is still in use, proof of its relevance.

In Bordeaux, even if a parcel-based work exists, it is less highlighted (this is changing). The goal is to create the wine of the Château, which represents the domain, the place, based on the different existing parcels. We then make a work of blending to bring out the best. And different parcels are blended because there is not only one red grape variety in the Bordeaux region. Even if the Cabernet Sauvignon is the king grape variety, there are large quantities of Merlot. Their marriage, their assembly allow to gain in harmony and in complexity. Many other grape varieties are cultivated such as Petit Verdot, Cabernet Franc, Malbec, etc. for the reds.

Bordeaux Burgundy: all related all different!

Yes, these regions are different and that’s good! Both produce wines of very high quality, representative of their terroirs, their climates. In red as in white, you will find exceptional wines with talented winemakers on both sides. To say that one is better than the other is not the most relevant, unless you want to create an electric atmosphere. Bordeaux VS Burgundy is a match that lasts! And on both sides you’ll find scathing retorts. You’ve got to love one another to get the best out of them. At Aveine, we are for diversity. So we will appreciate one or the other region depending on the occasion and the mood…but in reality often both!