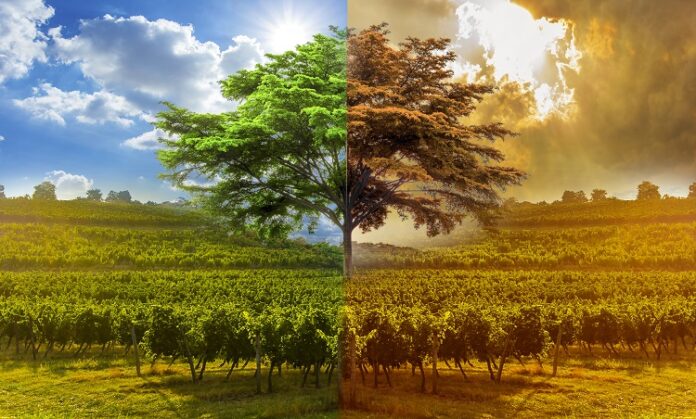 This is not a surprise for you if you follow the news, we are currently experiencing global warming. And this warming is caused largely by human activity, and the emission of greenhouse gases. IPCC experts indicate that if we exceed the limit of a +2°C increase, the impacts on ecosystems will be irreversible. Since the vine is part of these vulnerable ecosystems, the consequences of these changes could forever disrupt the processes. As a result, production, taste, and even the location of the wine-growing regions themselves could change. Here is an overview of the issues related to climate change affecting wine and viticulture, as well as its consequences.

To give you an idea of the seriousness of the situation, global warming could wipe out more than half of the world’s wine-producing regions, according to some experts. Therefore, the problem is urgent for the wine world because the impacts on this environment will be dramatic.

To be more precise, a warming of +2°C would lead to the destruction of 51 to 56% of the world’s wine-growing regions, due to a climate that would be too arid and a lack of water. At +4°C, 85% of the wine-growing land could be wiped out, or at least produce very poor quality wine. This weakness of the vineyards facing a dry and arid climate is due to the fact that the grape is a fruit that is very sensitive to temperature changes.

On one hand, some rather cold wine-growing regions, such as Germany, New Zealand, or the northern United States, would suffer very little impact. On the other hand, other warmer regions such as Spain, Italy or Australia would face massive damage, even though they already use grape varieties that are resistant to high temperatures.

In addition, with the increase in temperature, flowering occurs earlier in the vines, which can be problematic in case of frost.

The multiplication of meteorological phenomena

Another consequence of climate change is an increase in the number of severe weather events. In particular, the number of fires in hot regions, such as the south of France, Australia or California. Indeed, rising temperatures and climate change are leading to an increase in high winds, causing fires to start and fanning them, which very quickly become uncontrollable. As you probably heard on the news, fires have destroyed many vineyards in California in recent years, in Australia, as well as some in the south of France.

What changes can be made to save viticulture?

French scientists from the National Research Institute for Agriculture, Food and the Environment (INRAE) have carried out a study aimed at taking stock of the consequences of climate change on wine. In view of the situation, they proposed possible solutions to save the vineyards.

These same scientists have also carried out work on more than 1100 different grape varieties. They compared their adaptability to arid and dry climates. As a result of this work, they selected the 11 most popular vat varieties. Cabernet Sauvignon, Chasselas, Chardonnay, Grenache, Merlot, Mourvèdre, Pinot Noir, Riesling, Sauvignon Blanc, Syrah and Ugni Blanc. By comparing this study with winemakers’ archives from all over the world, they were able to establish a mathematical model. This algorithm could determine the flowering of these varieties and the period when the berries are ripe in each wine region of the world.

Moreover, this model allowed them to predict the evolution of grape varieties according to three global warming scenarios, i.e. no warming, +2°C and +4°C. In addition, they were able to determine the regions where each grape variety would do best, according to this increase in temperature. Even though a change in climate will affect the grapes and the quality of the wine no matter what happens, this team of researchers still found that it was possible to exchange certain varieties, thus reducing potential losses.

For example, Grenache and Mourvèdre could replace Pinot Noir and Merlot. In other words, this would mean that the grape varieties currently used in the Pays d’Oc would be better adapted in the Bordeaux region in the event of climate change. In Burgundy, it could be the same, with a replacement of Pinot Noir by Mourvèdre or Grenache. And in Alsace, Riesling could give way to Trebbiano, better adapted also in case of rising temperatures.

In the same way, another consequence of climate change to be expected for the wine world is the modification of the aromas of the grape varieties. Indeed, hydric stress, brutal changes in temperature or even frost, impact the balance between sugar and acidity of the grapes, which in turn impacts the range of aromas. For example, a white wine, once lively and delicate, could become more floral and fat. And a red wine, once tannic, could turn into a fruity and aromatic wine.

Another example of change in France is Beaujolais. As this region is quite cold, producers have for a long time added sugar to obtain sufficient levels of alcohol. This technique would therefore become useless if a major climate change were to occur. And this is already the case some years, for example during the heat wave of 2003.

This is because rising temperatures increase the level of alcohol in the wines, which can be problematic for some regions. However, it is possible to lower this alcohol level. But the techniques are expensive, complicated and are sometimes criticized because they change the typicity of the wine. The risk is therefore to produce wines that are no longer representative of their terroirs.

In addition, the wines will be more alcoholic, stronger and the tannins more present. Aeration of the wines will therefore be necessary and much more recommended than today. And more wines will require this step before being tasted.

What future for viticulture?

Agronomists determine the terroirs according to 3 factors: climate, soils and plants. Among these 3 factors, the climate has the most influence on the vine, around 50%. If this climate changes, the terroir and the vine will be affected, and consequently the typicity of the wine produced. The maturity of the tannins and the range of aromas will therefore be directly impacted. As well as the quality of the wines.

A change in grape varieties according to regions will also have legal and legislative consequences, particularly due to appellations of origin. Discussions have also begun in Europe to make it easier for regions to change the varieties they grow.

To summarize simply, one must imagine the current map of wine regions. They are located today in the center of the temperate zones, in each hemisphere. If climate change accelerates, these zones would slide 1000km towards the poles. As a result, new areas would therefore become arable while others would become too arid. And the central zones would have to adapt and change their cultivated grape varieties. (Find out more in this Greenpeace study)

Also, vines located at latitudes close to the equator are endangered unless they are planted at high altitude. For instance, it is the case in Morocco or Spain. On the other hand, in the south of France or in Bordeaux, the vines are close to sea level, and therefore more fragile in case of an increase in temperature.

Another evidence of the changes that are taking place: more countries at higher latitudes are starting to produce wine. This is the case, for example, in England, where the number of farms is increasing. Indeed, England today enjoys the same climate as Champagne 30 years ago. Other countries such as Denmark now have controlled appellations of origin for its region of Jutland.

Although heat is one of the main problems, it is the lack of water that will have the greatest impact on the vineyards. A vine stock can resist up to 40°C if it is well irrigated. In the future, this will be the key to success. Another solution could be to learn from organic farming. For example, by letting the vines grow up to 2 meters, the leaves would protect the berries from the sun and heat.

One thing is certain: in the future, consumer behaviour will have to change. Indeed, consumers will have to adapt to this “new viticulture”. And they will have to consume “responsibly” and favor wines produced in respect of the environment.

Should we have to choose between wine and health?

How do you make sparkling wine? The example of Cremant de Bourgogne.

Should we aerate young wines?

2020: a look back at a special year for the wine industry

The fifty-shades of wine colours