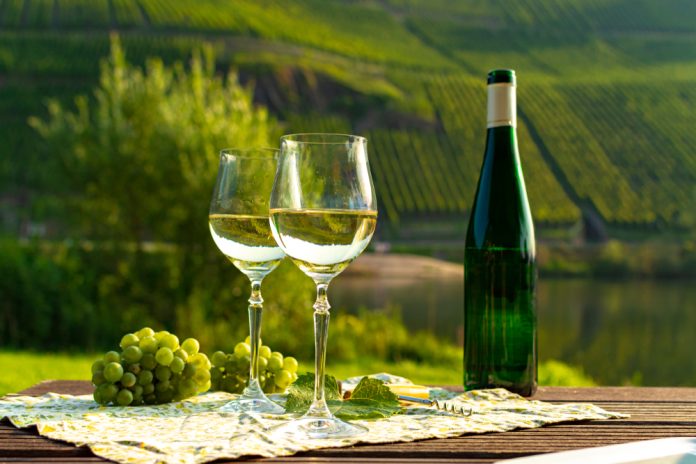 Germany might be better known for its beer, but the country also makes wine, and the wine is good. If you’re into wine, you’ve probably heard about Riesling — the aromatic white grape is Germany’s flagship varietal, but it’s not alone. And if you thought Germany was all about sweet wines, be prepared to be surprised. German wines are more varied than ever!

Let’s talk about German wines ! all you need to know, from the country’s wine styles and the grapes used to make them to the labeling rules.

Germany is the tenth-largest wine-producing country, with just below 3% of the world’s production. German wine has had its difficulties, but it’s hard to argue the country is not living a golden era in terms of quality and diversity. If there’s a time to try German wine, there’s no better time than today.

Germany is a northern country with low average temperatures. And, since grapevines like the sun, growing grapes is no easy feat in Germany. This has been the eternal struggle for grape growers and winemakers. it’s this struggle that has shaped the German wine scene throughout the ages.

Under Emperor Probus’s rule, the Ancient Romans planted the first grapevines in Germany sometime between 70 and 270 AD. Charlemagne, the first Holy Roman Emperor and ruler of almost all known world, encouraged viticulture around 800 AD. These traditions lived on well into the Middle Ages, during which the church and its monks perfected winemaking in Germany (and the rest of Europe.) Experts believe Germany thrived with vines by 1500.

The first late harvest wines, and those made with grapes affected by noble rot, were created in the late 1700s at Schloss Johannisberg in Rheingau, giving birth to the first Prädikat wines — the German way of classifying wine depending on the ripeness of the grapes.

Fast-forward to the 20th century, Germany created its first official wine classification based on the Prädikat system in 1971. And although sweet German wine became a global phenomenon in the 70s and 80s, the wines fell out of fashion in the late 20th century. Thanks to quality-minded producers and a new way of thinking, German wine experienced a comeback and is today better than ever.

The terms and the country’s classification system make studying German wine complicated but there’s still an easy way of understanding them: German wine is either Qualitätswein (Qba) or Prädikat wine (Qmp). These two tiers are remarkably similar and aligned with the PGI and PDO systems prevalent in Europe, but there’s a difference, the Prädikat.

There are six Prädikat levels: Kabinett, Spätlese, Auslese, Beerenauslese, Eiswein and Trockenbeerenauslese. These indicate the level of sugar accumulated in the grapes. In such northern latitudes, it’s easy to see why ripening the grapes was (and still is) rewarded more than anything else. And although wines labeled as Kabinett and, to some extent, Spätlese are not necessarily sweet, the rest of the categories usually indicate the final wine has residual sugar.

Pro Tip: If you want a German dry wine, look for the term “Trocken.”

Interestingly, not all winemakers today are interested in ripening their grapes as much as possible. Inspired by French winemakers and others in quality-minded regions worldwide, the wave of winemakers in the 1970s cared more about their wine’s “terroir” than sugar. This is why a group of winemakers created an unofficial wine classification and an association to regulate it. It is known as the Verband Deutscher Prädikatsweingüter or VDP.

The name of this winemaker association might be hard to pronounce, but its philosophy is easy to understand. This group of quality-minded producers classified German vineyards by mirroring Burgundy’s quality pyramid. The most straightforward wines come from a general region or commune and are labeled as such, while the best wines from the finest sites are labeled as Premier or Grand Cru, in German, VDP Erste Lage and VDP Grosse Lage. Most interestingly, these classifications can sometimes complement the official Prädikat system.

Concisely, the best winemakers in Germany are part of the VDP, so you can buy their wines with your eyes closed. For an everyday wine, look for Qualitätswein labeled with one of the country’s thirteen regions. For special occasions, go for an Erste Lage or a Grosse Lage. Then, simply choose your sweetness level based on the Prädikat terms on the label, if available.

And yes, things are a bit more complicated than this, but if you’re just getting started with German wine, this information is more than enough to help you pick the right bottle of wine for dinner!

Germany has over 100,000 hectares of vineyards, 23% of which are planted with the famous white German grape Riesling. Riesling, though, is not the country’s most planted grape — the most common varietal is Müller-Thurgau (although it’s declining yearly!) The third most planted grape in Germany is Pinot Noir, locally known as Spätburgunder, but over one hundred varieties are grown in the country.

As for wine styles, white wine is still prevalent in Germany, with 67% of the production volume (white grapes are easier to grow in cold climates.) Not all whites are sweet, though. In fact, most white wines in Germany are dry! Red wine, with 33% of the production, is becoming more common.

There are 13 wine regions in Germany, and although most are not well represented in the international market, they’re all worth knowing. The most praised German wines often come from the Mosel and the Rheingau, but up-and-coming regions, including Baden, Pfalz and Nahe, are worth exploring.

Most German wine, though, comes from the large Rheinhessen, commonly known for its everyday wines, but that’s changing as well, too. Finally, small wine regions in Germany specialize in exciting local wines, sometimes made with rare grapes, including Franken and Württemberg. Let’s talk briefly about every German wine region.

The Mosel comprises the steep vineyards overlooking the Mosel River and its tributaries, the Saar and Ruwer. Here, Riesling dominates 62% of the vineyards, and many Erste Lage and Grosse Lage sites exist. Ripening the grapes in this cold region is as hard as cultivating the steep vineyards. Still, the delicate dry and sweet wines from the Mosel are among the most prized worldwide.

The Rheingau covers thirty miles of vines overlooking the Rhine on one large hill with southern exposure. Riesling makes for 78% of the region’s 3,185 hectares of vineyards. Thanks to the region’s sun exposure, the grapes ripen more than in the Mosel, so the resulting wines are riper and richer, often high higher alcohol content.

Ahr is a tiny appellation with only 562 hectares of vines, and most of them are planted with Spätburgunder, AKA Pinot Noir. Ahr’s red wine is gaining recognition, but there’s not enough to go around!

Hessische Bergstreasse is a small but warm region that has struggled to find its place on the market. With only 463 hectares of vines, 80% dedicated to white wines, this region is not to be overlooked, although it’s still not known for any particular wine style.

Mittelrhein suffers a similar fate. Riesling dominates the region’s steep, terraced vineyards along a narrow stretch of the Rhine. Although the area is popular with tourists for its impressive landscape, its wine is still to find a place on the international shelves.

Pfalz is nestled within the dense forests of the Haardt Mountains. This is an extensive vineyard area with over 23,000 hectares of vines and around 130 towns, all committed to winemaking. Riesling makes for 25% of Pfalz’s vineyards, but Dornfelder, Müller-Thurgau, Pinot Noir and Grauburgunder (Pinot Gris) are also common. The wine here is of extraordinary quality, but most of it is consumed locally thanks to the famous Deutsche Weinstraße touristic route that runs 85 kilometers across the area.

The Rheinhessen is the largest wine region in Germany and produces most of the country’s wine. Although this is the source of not-that-interesting semi-sweet wines labeled as Liebfraumilch, there are talented producers in the area, and they’re elevating the region’s status. There are almost 27,000 hectares of vines in the Rheinhessen, most planted with Riesling, Müller-Thurgau, Dornfelder and others.

Franken is a rare wine region specializing in its unique flagship grape, Silvaner. Producers also use their own bottle here, the squat Bocksbeutel. Silvaner is herbal and crisp, so it’s a lovely alternative for the floral and peachy Rieslings made elsewhere. From the region’s 6,130 hectares of vineyards, the finest wines come from the vineyards around Würzburg.

Baden is red wine country, and it’s because this is the warmest region in Germany. It is also the third largest and provides the best examples of the now famous German Pinot Noir. Most wine is made in one of the one hundred cooperatives in the area, but family-owned estates exist. Baden’s wine quality is overall high.

Württenberg is also a region specializing in red wine, but there’s little Pinot here. The specialty here is rustic red wine made with Trollinger. Unlike Baden, Württenberg is all about small producers, most of them tending less than one hectare of vines! This is your go-to region for quality-minded producers making small batches of unique red wine you won’t find anywhere else.

This wine region runs through the Nahe River on its way to joining the Rhine. Although this is one of the smallest wine regions in Germany, wine lovers and connoisseurs have found in its wines a reliable source of wine, mainly Riesling, with a flavor profile not dissimilar to what you’d find in the Rheingau and neighboring Rheinhessen.

Saale-Unstrut and Sachsen are two small wine regions once part of Eastern Germany. These areas are not as well developed as those in the west, but their terroir is ideal for growing grapes. Müller-Thurgau is the most planted variety in these areas, although Dornfelder and Weißburgunder are also common. The wines are typically lively, fruit-forward and approachable. These regions add up to only 1291 hectares of vineyards.

German wine is more than sweet Riesling, the noble grape produces age-worthy dry wines as well. Then you have the country’s pale Pinot Noir and specialties, such as Franken’s Silvaner and Württenberg’s Trollinger. You have an extraordinary collection of wine for every occasion.

German wine can be intimidating, but it’s easy to add to your wine rotation. And once you get a hold of the long, unfamiliar terms on the labels, you’ll find enjoying German wine easy. For quality, Germany is hard to beat — as for versatility, German wine is unique!

Wine faults : how to detect them ?