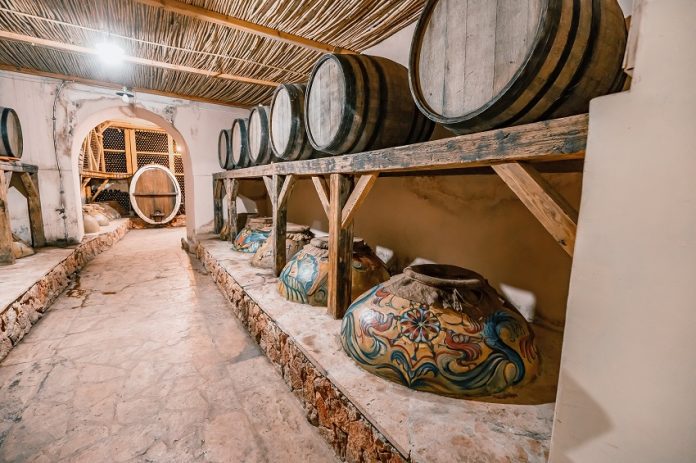 Today, let’s go to Georgia and Armenia: let’s cross the countries but also the time, on the first traces of wine!

We are going to take you to these two countries of the Caucasus region for which a new enthusiasm is emerging. We are more and more attached to rediscovering history and we are fascinated by the rediscovery of indigenous grape varieties. So even if we love them, no Chardonnay and Merlot in this article!

On the other side of the Black Sea, in Western Asia, Georgia is located between latitudes 41 and 43. This country has been fighting for its independence throughout the centuries. Wine has a very strong place there, with traces that go back more than 8000 years! The end of the grape harvest gives rise to a celebration, the Rtveli festival, which is very popular. The wine cellar takes on an almost sacred dimension for the Georgians, which makes us think that we all have a little Georgian side in us!

This wine making process has also remained, according to the ancestral traditions. It generally takes place in large terracotta jars, the Kvevris. Shaped like an egg, their capacity varies from 800 to 3500 liters. The Kvevris are sealed and buried in the ground to ferment for a period of 5 to 6 months. This method is classified as an intangible cultural heritage of humanity by Unesco! When used with white grape varieties, it gives birth to orange wine, since the skins, more or less loaded with pigments, remain in contact with the juice during the whole fermentation process.

Another traditional element of Georgian viticulture: the Maranis. These are nothing more or less than large hollowed out tree trunks, in which the bunches of grapes are placed to be crushed and pressed. One can hardly make more typical!

With more than 500 listed grape varieties there is no shortage of trails! Many indigenous grape varieties make up Georgia’s vineyard, which is a huge advantage in this day and age. We particularly enjoy finding and tasting specific wines. The major difficulty will be for us to pronounce these names correctly! They are also extremely difficult to remember. This may seem trivial, but it can really limit international development.

The most famous grape varieties are Saperavi for red wines and Rkatsiteli for white wines. Saperavi requires a warm climate and offers colorful wines with a nice tannic substance. It is the most famous. Rkatsiteli is a white grape variety that can be found in many countries that were part of the USSR. It is particularly resistant to cold and offers large yields. It is also used for orange wine.

The most important wine region is called Kakheti. It is in this region that the oldest origins of wine can be found. A destination to visit at least once in a lifetime for all winelovers!

Georgia’s neighboring country, further south, at latitudes 41 to 39, Armenia also offers a leap in time. Among the first traces of Vitis Vinifera Silvestri, dating back to the Neolithic period. Indeed, in a cave in Areni, we could find amphorae which had contained wine in -4000 BC, and even uncovered a cellar!

The climate in Armenia is continental with extreme winter temperatures, requiring in some regions to bury the vines so that they can survive! Summers are particularly dry and require the use of irrigation techniques.

The task might seem daunting with over 400 different vine varieties. But many indigenous grape varieties have unfortunately disappeared nowadays. There are only about forty of them left today. Let’s mention the most important ones, such as the black Areni, which can be found in freehold, especially in the region that bears the same name. The Khndoghni is very rich in tannins.

For the whites, Voskehat is known for its finesse as well as Kangun. This does not speak to you? Don’t worry, it’s normal!

The most important wine region is the Ararat Valley. There is a wide diversity of indigenous grape varieties, both white and red. This region is also famous for producing quality spirits. Armenia was designated during the occupation of the USSR to produce what was called at the time the Armenian cognac! The image of Armenian wines had been put in the background during this period, making people forget its rich history. Armenian wines are to be rediscovered!

Georgia and Armenia, an invitation to rediscover wine

To be interested in the history of wine is a fascinating thing, especially when it brings us to Georgia and Armenia where wine was born! We go back in time while traveling. This particularity of the wine world makes all its charm. We also realize that some ancestral practices are gradually coming back to the taste of the day: orange wine, jars…

We love being able to tell ourselves that this passion that drives us seems limitless! It can be the starting point, or the connection, with other passions. And the pretext for travel. Think about it when you have the opportunity to go to one of these countries. There are beautiful discoveries to be made all over the world, and also rediscoveries!