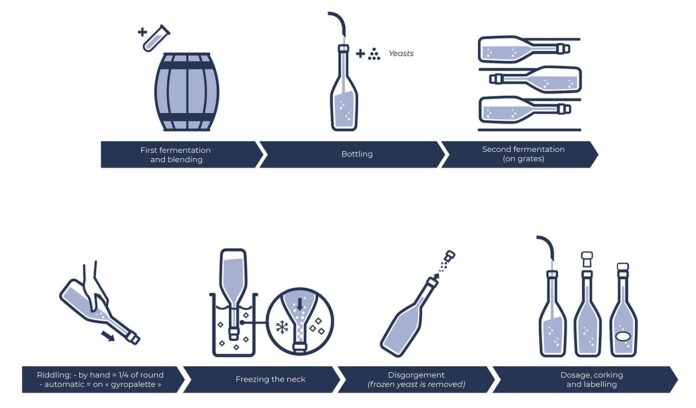 Today we would like to come back to the production of sparkling wine, like cremant, or champagne, or prosecco, or cava… For short, we are going to talk about the méthode Champenoise, or as we should say, the traditional method. To be clearer, it is more or less the same and you’ll see that it’s not always very “traditional”.

Aveine team went to visit the Maison Veuve Ambal. It is the largest producer of Crémant de Bourgogne with a production of 7.5 million bottles per year out of a total of 21 million produced.

Moreover, to be called Crémant de Bourgogne, the grapes must be harvested in Burgundy. For Veuve Ambal, it is 300 Hectares of plantation grouped in 4 parts: the Chatillonnais / Auxerrois / Hautes côtes de nuits / Couchois.

DID YOU KNOW? BEAUJOLAIS, ALTHOUGH OUTSIDE THE “ADMINISTRATIVE” BURGUNDY, IS A BURGUNDY WINE BECAUSE THE VINES ARE PLANTED ON THE SAME GEOLOGICAL TERROIR.

It must be said, in real life, it is the same thing. It is the most common technique to make a sparkling wine or a crémant. The Champagne region claims they invented it, but above all the term “champagne” is registered as an AOC (Appellation d’Origine Contrôlée = Controlled Origin Appellation). So, all the other “bubbles” cannot be called champagnes! The term “method champenoise” is therefore reserved for champagnes.

The first to have created a sparkling wine according to the “traditional” method would be the inventors of La Blanquette de Limoux! (but the debate is still open!)

How to make sparkling wine?

To make sparkling wine like crémant, a double fermentation is necessary. But first of all, the grapes must be harvested early so that they are not too full of alcohol. These harvests generally take place around mid-August. Beware, this is not really a green harvest, as the grapes are ripe! You must be careful with the selection of the grapes. Grapes that are not ripe enough or too ripe could damage the wine.

The pressing and the 1st fermentation

The grapes are quickly pressed without maceration to keep a clear juice. Then the wine ferments in vats, or in barrels for some houses. More and more independent winegrowers prefer using barrels for fermentation.

Most sparkling wines are “brands”. We are familiar with those of Champagne but in other countries or regions, it means more or less the same thing: from year to year, they will reproduce the same wine. To do this, the winemakers will create blends with the latest harvests of the different grape varieties (grape varieties which of course vary from region to region).

The blend is perfect and will give the same wine as last year and next year. The wine is now ready to be bottled. “Liqueur de tirage” is added which means adding sugar and yeast. It is the yeast that will allow to make bubbles! Indeed, the yeasts will attack the sugar and cause the creation of carbon dioxide and give a characteristic taste to each sparkling wine.

Closed by capsules, the bottles then rest for a minimum of 9 months for the cremants (12 months at Veuve Ambal) and 2 to 4 months for the champagnes. This is the second fermentation.

“You mustn’t shake the champagne! ” And yet, during its conception, there is an operation known as “remuage”. After being on slats during the second fermentation, the bottles are placed upside down to bring the yeast deposit down into the bottle neck. At the same time, the yeasts will continue to diffuse their aromas. To make the deposit fall to the bottom of the bottle, they must be stirred. Back in the time, we used to make quarter turns of the bottles every day. Today, the people of Champagne have invented an impressive machine: the gyropalette! A device that allows to reduce the riddling time considerably by carrying out this operation automatically. Nevertheless, some houses still have it done by hand by workers called “stirrers”.

Once the deposit is well wedged in the neck of the bottle (and the wine is fully mature), it must be removed (the deposit). This operation is called disgorging. To do this, the neck must be frozen in Nitrogen at -17°C (around 1.4°F). The deposit is then locked in ice. The bottle is then turned over and the capsule ejected. The ice cube and its deposit fixed on it and are dragged away with it! At the time this operation was done by hand. It was as if the bottle was sabered, fortunately the neck remains intact.

The void generated must be replaced by “dosing liquor”. It is a mixture of wine and cane sugar. According to the quantity of sugar, a mention will be displayed on the label:

It is then necessary to close the bottle and label it. All that is left to do is pop the cork and enjoy!

These wines are used to party! And remember that they can be aired.

What is orange wine?