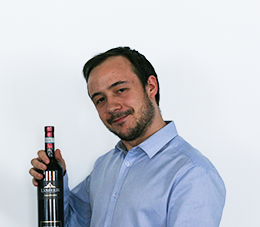 To celebrate the International Geeks’ Day, we decided to honor our favorite geeks. That is to say our technical team headed by the head of geeks, Christopher, CTO of Aveine.

First of all, some precisions to understand the introductory sentence of this article. A geek is a computer enthusiast, a fan of video games and above all someone who is curious and cultured. The CTO is the Chief Technical Officer, and in a startup like Aveine, his role is central.

Because behind the aerator and the application there is innovation and technology. And behind it all is the technical team.

How did you get to the position of CTO at Aveine?

I joined the company very early as an intern, more precisely at the time of the creation of the company. At that time, Aveine’s team consisted of 2 intern developers and the CTO.

Right from the start, I was blown away by the solution developed by Aveine. And being there at the very beginning there was everything to do: working on the aerator, the beginnings of the mobile application, the wine database, etc. It was very exciting! After my internship I continued to work for Aveine as a freelancer during my studies so that I didn’t miss anything about the project. At the end of my studies, I was finally hired as a developer.

After some changes in the team, and two years ago, I was appointed CTO of Aveine because of my seniority and my deep knowledge of every technical element developed since the beginning.

How would you explain your work to someone who doesn’t understand technology?

I am in charge of supervising the development and maintenance of all Aveine’s technological solutions (mobile applications, aerator, internal tools, etc.). With the help of the technical team I lead, of course.

I have to anticipate new technical innovations as well as new products and services. And I have to make sure that what is already in place continues to work properly. But also make technological decisions adapted to the development and efficiency of Aveine’s activities.

Of course Aveine remains a small startup, so I often continue to help the technical team in the realization.

How does the Aveine connected aerator work?

Usually when we decant wine, we increase the contact surface between the air and the wine in order to accelerate oxygenation compared to an open bottle. The Aveine aerator works in the same way. But here we let a small amount of wine pass through the aerator and inject a more or less important volume of air depending on the setting of the aerator in order to accelerate the phenomenon even more. Everything is natural. We inject nothing more than the ambient air captured by the micro-pump inside the aerator to create this phenomenon.

The Aveine app has a very simple primary goal: to have access to a recommendation of the aeration time of a bottle of wine with a simple scan of its label. Of course we have enriched the experience around this feature. For example having the aerator calibrate itself automatically if it is connected to the phone via Bluetooth.

It also allows us to offer new services over time to enrich the overall experience or to improve it. For example, with the Aveine application it is possible to update the aerator. This allowed us to improve its functioning and autonomy after the initial release. In terms of services, we have worked a lot on wine data (favorites, search, history, …) And in particular on proposing an aeration for a wine right after the user answers few questions. Even if the scanned wine was not in the database, the user always finds what he came for.

Of course, the application offers many other features that I haven’t mentioned here. And we will continue to enrich it as we have many ideas for it!

How do you create new features?

We have two types of features: those requested by the community to meet a need that we had not thought of (sleep mode on the aerator for example). And those that we have planned internally.

Every two weeks we choose the features we are going to work on. We try to prioritize those of the community because we judge that they are more important to them if they have asked for them. After all they are the first users of our solutions, they often know their needs better than we do!

Once the functionalities are selected, they are discussed within the company to detail their technical execution, the limits, the needs or the difficulty of implementation. We then have a first phase of execution which passes by models and sometimes small tests of concept. Then, once validated, the final development can take place.

Once the feature is complete on our development environment, we switch it to our internal test environment for about 1 week. The “non-technical” members of the staff are then invited to test the feature to ensure that there are no problems and that the proposed experience meets the need. Finally, if everything is validated, it is released to the users to enjoy!

How is the team composed?

Aveine has a very rich technical environment for a small startup, which is a bet we took to grow faster in the future. Therefore, we thought it was important to have a manager for each technological part.

First of all we have a user experience and user interface (UX/UI) designer, Antonin. He thinks about the best interface to set up so that the user experience is optimal while keeping the Aveine graphic spirit.

Mobile applications play a key role in the experience that Aveine offers. The team is currently composed of an Android mobile manager (Julien) and an iOS mobile manager (Marwen) to cover the specific needs of each platform.

Then we have Lazhar, in charge of all our solutions accessible via a web portal (internal and external). These allow us to consider new services outside the application.

Of course we have Pierre, developer in charge of the aerator if we want to release new features on the device. Pierre also takes care of some server features.

Finally, as I said, even if I am the CTO of Aveine, I am also part of the technical team. I take care of the whole infrastructure part and also participate in the server features.

What games do you play after work?

In these times of remote work, due to the health crisis, we actually like to keep a strong social link with the members of the technical team because it is important. Right now, on Thursdays after our weekly meeting, it’s Gartic Phone!

There is no winner. The goal of the game is simply to have a good time and enjoy how the initial sentence has been transformed after several drawings and interpretations. Spoiler: it’s rarely the original sentence!

Being the CTO of a startup like Aveine also means becoming the company’s tech face. It means representing the company to important clients who need technical explanations, but also leading external actions. Aveine’s tech team is passionate and invested in their work. They’re always looking for ways to improve the AVEINE aerator and application. Thanks to them!

2020: a look back at a special year for the wine industry