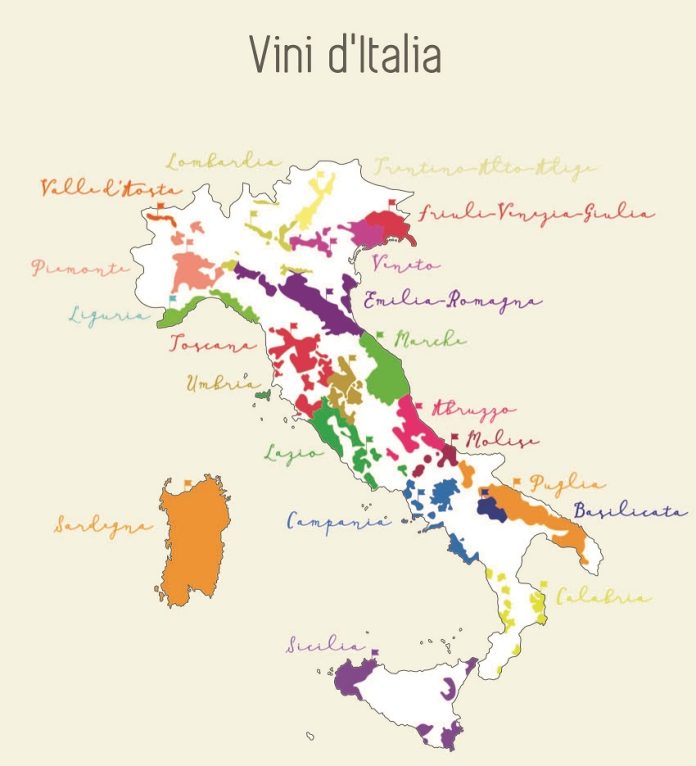 Wine in Italy is as important as food! And both Italian food and Italian wine are knowned and appreciated all over the world. Here’s an overview of the place of wine in Italy.

History of Wine in Italy

Wine has a long history in Italy, dating back to 1000 B.C., or even before that. It can be traced back to Phoenicians and Greeks who imported vines into southern Italy from their homeland. The introduction of viticulture and vinification helped to develop the economy through trading with neighbouring populations.

The grape varieties that were introduced adapted and evolved and are still used now in Southern Italy.

Viticulture spread to Southern and Central Italy and when the Romans took over, it was exported all over Europe.

Of course, what the Romans consumed is far from the kind of wine we drink today. Indeed, the vinification was not very refined, probably with wild or acetic fermentations happening as well. The wines at the time were commonly mixed with water (with a higher proportion of water than wine), milk or honey, especially for the lower grade, bitter wines. The figure of the magister bibendi was born. He was in charge of deciding how and in which proportions to mix the wine before a banquet. And he also decided how many glasses could be consumed.

The most famous example of a wine of the Roman Empire was the Falerno. It was coming from the greatest vineyards of Southern Italy, for exclusive use of emperors and nobles.

With the fall of the Roman Empire, the Barbarian invasions and the advent of the Middle Ages, vines were cultivated only in monasteries. And it was made almost exclusively for use in ecclesiastic rites and for the monks to drink.

During the Renaissance and all the following centuries, wine was made again available for the population. It was also exported through new commercial routes.

Another major setback came with the First and Second World War, during these conflicts most of the vineyards were destroyed.

In the second half of the twentieth century, just after the war, growers concentrated on yields. Their main goal was to grow as much grapes as the vineyards could handle, with very little care for the quality of the resulting wine. This way, they could sell more of it. In these times, wine was made mostly for the lower class and for home consumption. As a matter of fact, very few producers made high quality wines. The higher classes consumed imported wines, mostly from France.

Luckily in the 1970s something changed. Indeed, younger producers decided to concentrate on quality, jump starting a rebirth and revolution of the Italian wine industry. It all started in Tuscany, a region with a long history of quality wine making and also the first region to officially draft rules for the making of a wine – Chianti. It quickly spread to the other regions, especially in the North.

Now Italy is one of the world’s biggest wine producers, sharing this primacy with Spain and France. Italy is also the biggest exporter of wine, with 19,8% of all wine exported coming from Italy, with a production now very much concentrated on quality wines: 43,5% of wine produced is PDO[1] and 23,3% is IGP[2] (2020).

The wine Industry in Italy

The wine industry is extremely fragmented, with the largest number of indigenous grape varieties of any country, more than 520 different GIs[3] and a lot of smaller scale producers. This means that Italy offers one of the largest varieties of wines than any other country. Moreover, vines are cultivated in every region, at every altitude level. Vineyard extension has reached 658000 hectares (2018) placing Italy in third place in the world for vineyard area, making up 9% of the total worldwide.

The wine label system in Italy

The GI system in Italy is based on the area of origin of the grapes. This links it deeply with the tradition of that area. At the top there are the DOCG[4] and DOC[5] indications of origin, with DOCG having stricter rules in vineyard and winemaking practices. The wines bearing these PDOs must be made from grapes grown and worked only in a delimited region, according to regulated standards and following rules in vineyard management and winemaking processes. At a lower level we find IGTs (also named IGP in concordance with EU regulation). These wines are usually made from grapes coming from broader areas, sometimes covering more than one region. For example, Trevenzie IGT (spanning from Veneto to Friuli), but more often encompassing a single region (e.g. Toscana IGT).

At the bottom of the pyramid, we find the Vino da Tavola (table wine). These wines can be made from grapes coming from anywhere in Italy. Indeed, there are no restrictions on vineyard or winemaking practices and very few rules regarding the labeling. This indication is typically used for low level everyday drinking wines. But it is also used by producers who want to make a wine outside of their usual PDO range, for example when Sassicaia started out it was labeled as table wine.

The strong suit is of course the indigenous grapes like Sangiovese, from which Chianti and Brunello di Montalcino are produced. Or Nebbiolo, from which Barolo and Barbaresco are produced. Also Glera, which is used to make Prosecco, and so many more. All these wines are renowned worldwide, consumed a lot in Italy, but also exported in huge quantities. They’re appreciated and loved all over Europe and in the “New World”.

Of course, like any other winemaking countries, international varieties found their home in Italy as well. Some are used together with indigenous grapes to give a more “international” cut to wine or some are vinified on their own. In many cases producers make wines of outstanding quality recognized and prized all over the world. For example the incredible world of Supertuscans: Cabernet Sauvignon, Cabernet Franc, Petit Verdot, Syrah and Merlot planted on the beautifully sunny Tuscan coast in the Bolgheri DOC. Elevated to this status by Robert Parker, these wines now sit in the Olympus of the greatest wines in the World (Sassicaia, Ornellaia and many, many more).

Italian viticulture is also very sensible to the environment and sustainability. Italy is the biggest organic grape producer in the world with 15,8% of all vineyards grown under organic standards. It is also the biggest exporter of organic wines, widely surpassing all of its European counterparts.

The variety of grape varieties, regions and climates allows Italy to produce wine in all price points and to be flexible to changing market demand. It is very consolidated in export markets, especially in the mid and higher price range. Imports grew a fair bit in the last years but mostly in the low-price bulk wine category indicating that the internal production is concentrating on producing higher quality wines. The bulk of the wine imported is to satisfy the internal demand for lower priced wines.

[1] PDOs Protected Designation of Origin are indications that must be reported on the label; they indicate that the grapes come from a delimited area and all the winery processes have been carried out in that area. It’s a synonym of high-quality wine. They also state what kind of grape varieties can be grown and used and how the wine can be made (restricts certain practices in the winery).

[2] IGP (PGI): Protected Geographical Indication. Its an indication of grapes and winery practice being grown and made in a single area – only this time the area is much wider, and the rules are more lax.

[3] GI: Geographical Indication. It indicates the region where a wine is made.

Which wine gift for Christmas?

All about fortified wine