Accueil Wine and Business Romanée Conti, a mythical wine among the most expensive in the world
Facebook
Twitter
Linkedin
Email 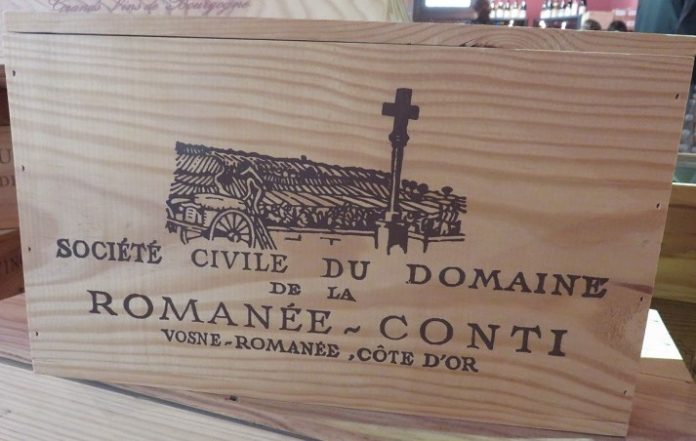 After Liber Pater and Petrus, we chose to talk about another wine among the most expensive in the world. This time we focus on the most mythical of all Burgundy wines, Romanée Conti.

Romanée Conti is part of the Domaine de la Romanée Conti, or DRC. DRC, these are three mythical letters for all wine afficionados that gather mythical vineyards of Burgundy.

This wine has been on the podium for many years for the title of the most expensive in the world, but not only. It is also known as one of the finest, most refined wines in the world.

Romanée Conti is located in Burgundy in the town and appellation of Vosne-Romanée, in the famous Côte de Nuits. This part of Burgundy is extremely famous for its red wines produced from the Pinot Noir grape variety. This climate was quickly identified as being extremely qualitative.

It was Louis François de Bourbon, Prince de Conti, who acquired La Romanée in 1760 and it became La Romanée Conti. After the revolution, during which the property was confiscated and sold as national property, the merchant Jacques Marie Duvault-Blochet finally got it in 1869. His descendant is the current co-owner, Aubert de Villaine. He holds an equal share with the Leroy/Roch family, a very important family of merchants in Burgundy.

Romanée Conti covers 1.77 hectares, for an average annual production of about 6000 bottles. This parcel has been famous for several hundred years. The Prince of Conti reserved La Romanée for his table only. It is considered to produce the most beautiful expression of Pinot Noir, bewitching, and with an extraordinary ageing potential! An adequate aeration is also required to perceive all the fragrances.

The property is run according to the precepts of biodynamics, started in 1995 and completed in 2006. The age of the vines is around forty years after an important restructuring in the years 1945.

How to get Romanée Conti

6,000 bottles, to supply a world market that craves this wine, is, so to speak, almost nothing! This explains why it is extremely difficult to get a bottle of Romanée Conti.

This is what also allows us to understand the policy of the domain, because it will be necessary to buy a case of 12 bottles including 11 bottles of the other crus of the DRC to obtain a single bottle of Romanée Conti!

The other vineyards of DRC

This is the perfect opportunity to tell you about the other wines produced by the estate. These are also exceptional wines. All of the DRC vineyards are located on Grands Crus parcels. These parcels, or climates, represent the top of the top of the Burgundy classification, and have done so since the Middle Ages. The DRC produces 6 red wines and 1 white wine which is also exceptional and extremely rare, the Montrachet.

The 5 other red wines are climates located in the appellations “La Tâche”, “Richebourg”, “Romanée Saint Vivant”, “Echezeaux” and “Grands Echezeaux”.

All the vines represent about 26 hectares. It should be noted that “La Tâche”, a neighboring vineyard of Romanée Conti, and Romanée Conti are monopolies, which means that only the DRC owns all the lots of these climates, something extremely rare in Burgundy.

And even if Romanée Conti is the most expensive wine, don’t think that the other references are cheap! Each case costs several thousand euros and requires an allocation to obtain them. Year after year the prices increase… although they are relatively reasonable compared to the prices that can be reached in the auction rooms.

Attractive prices through the allocation system

Different variants of allocations exist. It consists in committing to take a certain amount of wine every year. One could see it as a kind of subscription. You have to become a recipient to be eligible for the wines of the domain. People are rushing, with a waiting list that seems endless, but you also have to be recommended! Indeed, the speculation is enormous. A case bought through the allocation system immediately sees its value multiplied by 3, or 4, or even much more on the parallel (or “grey”) market.

This poses a real problem for all winelovers but also for Aubert de Villaine who wants the wines to be consumed above all. As the bottles are numbered, it is possible to ensure traceability. The individual allocatees who feed the parallel auction market risk losing their precious allocation if they give in to the temptation of profit.

All these factors contribute to make Romanée Conti desirable to a wide range of people, whether they are wine lovers or investors.

All about volcanic wines

Aging wine underwater, why not?