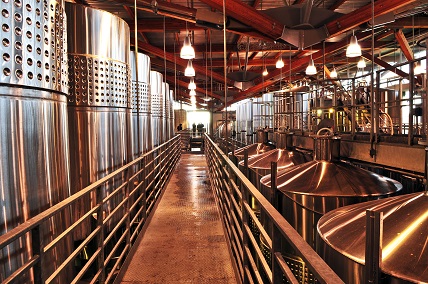 After talking about the various characteristics of oak barrel ageing in a previous article, let’s now turn to other types of containers, the stainless steel and concrete tanks!

These containers are said to be “inert” in the sense that there is no exchange of substance between the wine and the walls of these containers. No more woody, vanilla or coconut notes! It is then the opportunity for the grape to express all its raw splendor! Let’s take a closer look.

The interest of inert containers

Using an inert container allows the fruit to fully express itself. If for some grape varieties barrel ageing allows to soften a pronounced aromatic intensity (like Cabernet Sauvignon), in other cases, the opposite can also be sought! Think for example of a fruity and tense Sauvignon Blanc from New Zealand, resolutely focused on the varietal side of the fruit, for which the oak could take over and thus unbalance the wine.

Stainless steel tanks have experienced a tremendous boom in the 1970s. The main advantages that can explain this, besides a fashion effect, are hygiene and thermoregulation.

Hygiene first: it is much easier and faster to clean a stainless steel tank. In addition to the obvious practical aspect, hygiene is extremely important during the various wine-making processes. The risk of altering the quality of the fruit is real, and attention to detail often makes the difference among the best. Many winemakers call themselves “house-proud”!

Thermoregulation is a process that has developed very well with stainless steel tanks. There are coils that surround the tank. They are filled with water that can be heated or cooled. We can thus play on the temperature of the wine contained in the tank, and work in a precise way the various stages of the wine making.

If the sanitary state of the grapes in the vineyard is primordial, it seems logical that its state be preserved and respected in the cellars! In this sense, stainless steel vats have brought a real plus in this respect, so much so that some great names have quickly acquired them. Among the precursors is Château Haut-Brion, 1er Grand Cru Classé 1855.

To these two reasons can be added the economic aspect. Indeed, stainless steel tanks, when well maintained, can be used for several decades without being replaced, unlike oak barrels, for which a regular renewal is necessary.

At a time when stainless steel tanks were booming, concrete tanks were losing ground. The main reason for this could be the great difficulty in cleaning the inside of these tanks. They were coated with polyurethane resin that had to be scrubbed with insistence to clean them. But let’s also mention the fashion effect!

However, the main advantage of concrete tanks has never been forgotten. It is the thermal inertia. Indeed, because of the thickness of the concrete, the wine contained inside undergoes less temperature variations, much more progressive. This softer variation is, once again, a key element in winemaking that must be dealt with the utmost subtlety in order not to rush the wine.

Concrete tanks are back in the cellars

We are currently witnessing a revival of concrete tanks in recent years. Technologies have evolved, and thermoregulation has also made its appearance in concrete tanks. Also, the internal walls have been revised, not necessarily requiring the use of a resin.

Fashion is also a factor. For example, some of the forerunners of stainless steel have returned to concrete. The shapes have also changed. Some tank sizes have been sized to fit the different parcels of the estate. Others have even changed their shape! Exit the rectangular vats, replaced by eggs! These ovoid shapes are particularly fashionable today, in the wake of amphoras and jars. Some have made them their trademark, like Château du Tertre in Margaux or Larrivet Haut-Brion in Pessac-Léognan.

As for the question of the difference in taste between the same batch that would have been vinified and matured in concrete vats and in stainless steel vats, we were able to perceive some nuances. In our test, the concrete tank offered a batch with a little more texture than the stainless steel tank, which was more lively. We could therefore have fun composing a blend of the same plot with different inert containers! This may seem extremely complex, but we find it especially exciting! This is also the case when you taste the same wine but with different aeration. The field of possibilities when making wine seems limitless, and that’s a good thing!

All about the Lambrusco

How to use a wine decanter?