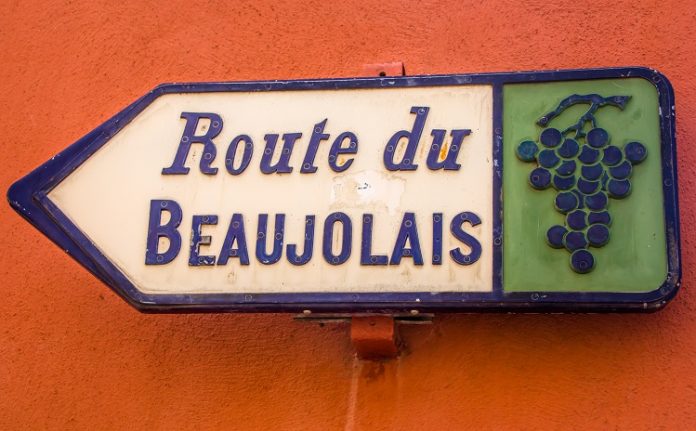 “The Beaujolais Nouveau has arrived! “Who has never heard or seen this sentence at the entrance of a bistro, or from a friend inviting you for an aperitif? Every 3rd Thursday in November, it has been the same ritual for many years in France: the new vintage of Beaujolais Nouveau arrives. A wine sometimes praised for its taste, sometimes criticized for its quality, most of us all agree that Beaujolais Nouveau is associated with good times spent with family or friends, at home or in a local bistro. Produced in a small wine-growing region north of Lyon, it has conquered France and the whole world. But do you know the true story of the most famous primeur wine of all?

The History of Beaujolais Nouveau

A recognized commercial and cultural success for over fifty years, Beaujolais Nouveau is a wine steeped in history and tradition.

Born of an administrative exception

On March 11, 1951, a government decree appeared in the official gazette and specified that “producers are authorized to release from their cellars the wines of the year’s harvest benefiting from the designation of origin only as of December 15 of each year″.

Following this decision, the wine union in Beaujolais asked for the possibility to sell its wines “en primeur” before this deadline. This request was granted on November 13, 1951. Thus, was born the Beaujolais Nouveau phenomenon.

The phenomenon spreads throughout France

Very quickly, this primeur wine is sold and consumed in the Beaujolais cellars, then in the bistros and restaurants of Lyon, the largest nearby city in the region.

But its success only began in the 1960s. People started to consume it everywhere in France, especially in Paris, where establishments offer special events, and where specialized stores close late to offer the famous Beaujolais primeur wine.

Originally, Beaujolais Nouveau was available for sale every 15th of November each year, then every 3rd Thursday of the month, in order to avoid administrative problems (if this day falls on a Sunday for example). Indeed, being a primeur wine, the administration has to validate its sale, hence the need to find a working day, and the idea of the 3rd Thursday of November simplified its sale.

In terms of production, the volumes of Beaujolais Nouveau never exceed half of the total production of Beaujolais, for technical reasons. Indeed, in order for the wine to be ready quickly, i.e. for the malolactic fermentation to be completed, producers give priority to their earliest plots. They also apply a maceration of 10 days maximum. This technique forces producers to limit the so-called “primeur” production to only 50% of their average harvest.

In terms of tasting, since it is a young wine, it is recommended to drink it quite cool, around 15°C. It should also be consumed within 6 months, to take full advantage of its emblematic fruity taste.

Moreover, because of its youth, it is a wine that requires good aeration.

Finally, Beaujolais Nouveau is not a real designation of origin, but more a trade name of the Beaujolais and Beaujolais-Village designations of origin. However, some professionals qualify it as an appellation in its own right.

Every year, about 30 million bottles are sold in France and worldwide.  On average over the last ten years, 50% have remained on the French market, and 50% go to the rest of the world.

Here is the breakdown of sales by country in hectoliters:

Over the last ten years or so, the popularity has also declined in France. Sales have fallen from 304,000 hl in 2008 to 170,000 hl in 2018. This drop in sales can be explained by recent changes in consumption, as well as by the poor image that Beaujolais Nouveau can sometimes have, that of a wine of low quality.

To compensate for this drop in sales, producers increased prices, allowing them to continue to produce this wine and sell it over the years.

In addition, in order to restore its image, which has sometimes become negative, producers have put a lot of effort into its quality, which has clearly improved over the last ten years or so.

Beaujolais Nouveau is exported to 110 countries around the world, but it is in Japan that it is most successful, and where it is the most awaited each year. But what are the reasons for this interest?

The country has been importing Beaujolais Nouveau since the 1980s. And it very quickly became a commercial and cultural success, due to its taste characteristics. Indeed, consumers are not looking for rich and woody wines, but rather light and fruity, just like Beaujolais Nouveau.

In addition, its arrival marks the beginning of winter in Japan, and the Japanese are very attached to time markers during the year, which are often associated with consumption habits. Beaujolais Nouveau, for example, falls exactly between Halloween and Christmas, two important holidays in Japan.

In the land of the rising sun, wine consumption is only 3 liters per year per inhabitant (compared to 50 liters for the French). For most Japanese, a large part of this average of 3 liters corresponds to Beaujolais Nouveau, which is consumed all over the country.

The wines are enjoyed by everyone, whether connoisseurs, who can get a foretaste of the coming vintage thanks to this primeur wine, or amateurs, who consume more because of tradition and consumption habits.

Beaujolais Nouveau is also a success in Japan because it remains an affordable wine for the country. Most of the time, it is sold for around 2,500 Yen, or about twenty euros. Nevertheless, it remains a luxury product, which could be compared with the consumption of Champagne by the French.

Due to Japan’s geographical location, it is also the first country to taste this wine, which gives it an exclusivity highly appreciated by Japanese people.

Finally, 10% of French wine exports to Japan are Beaujolais Nouveau, and almost all imported bottles are sold in just ten days.

Some anecdotes about Beaujolais Nouveau

In 2014, 6 Boeing 747s have been mobilized at Roissy to export Beaujolais Nouveau to Japan. This large number of chartered aircrafts is proof of the importance of this market.

Since 2005, the Japanese spa Onsen-spa Kowakien Yunessun in Hakone, offers a bath in Beaujolais Nouveau, during the 10 days following the arrival of the wine in the country. This concept has made the reputation of this Spa throughout the country, and even worldwide. A lot of Japanese people go there every year to bathe and enjoy the so-called beneficial virtues of this bath.

Beaujolais Nouveau is not at all a unique wine. Indeed, there are about 2500 of them each year, due to the number of producers in the region.

The taste of banana

As with Champagne, Beaujolais Nouveau harvests must be done by hand. Harvesting with machines is totally forbidden.

Every year, the Beaujolais Marathon is organized in Villefranche-Sur-Saône, and brings together more than 10,000 running enthusiasts from over 60 countries. If an official race is organized, another more unofficial one is enjoyed by enthusiasts, often in costume, and consists of running a shorter distance, while drinking Beaujolais Nouveau every kilometer covered. Other races, more family oriented, are also organized, where parents and children share a convivial moment (and without alcohol of course).

When the Beaujolais Nouveau arrives, we can say that it brings a touch of conviviality!