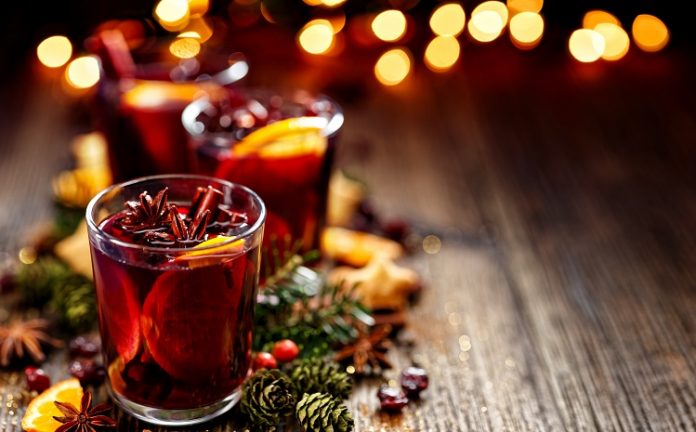 Christmas season is coming with its traditions, for the great pleasure of young and old alike. And even if this year 2020 is definitely not the usual one, and Christmas might be a little different, there are some traditions that we do not deviate from. Mulled wine is one of them! But do you know where this tradition comes from? We tell you all about it in this article, and most importantly, we’ll give you a few tips on how to prepare it at home.

We find the first traces of the existence of mulled wine in the year 20 AD, within the Roman Empire. At that time it was called Conditum Paradoxum, and the Romans made it from boiled red wine, to which they added honey, spices (pepper, laurel, saffron) and dates. This mixture, quite bitter, was then mixed with better quality wine, resulting in a sweeter and more drinkable beverage. This drink was quite different from the one we know today, but it is surely the one that is at the origin of mulled wine.

If we go a little further forward in time, we find the trace of mulled wine in the 12th century, where it was called “spicy wine“. This drink was very widespread, especially in France and Spain. The recipe for this “spicy wine” was even found in the works Tractatus de Modo and in the Regiment of Sanitat, written by Arnaud de Villeneuve, a doctor and theologian of the time.

This beverage spread even more in the 13th century, thanks to the port of Latte, located near Montpellier, and became popular as far as England. The English king of the time, Henry III, even used to drink it at his table and was fond of it. It is notably thanks to its high consumption that historians have been able to find the trace of mulled wine in this period of History. It then continued on its way, and was democratized in Germany, via Count John IV, around 1420, then in the Nordic countries, including Sweden, where King Gustav I particularly appreciated it…

Why do we drink mulled wine at Christmas?

The tradition of mulled wine for Christmas, or more broadly for the end-of-year festivities, did not appear until the 1890s, thanks in particular to the Christmas markets that were very popular at that time in Germany. The idea of consuming mulled wine to warm up at an outdoor market in the middle of winter then appealed to many sellers. They began to offer this beverage for sale, each with their own recipe, and a particular glass or label design, to stand out from the competition. This “contest” between merchants only reinforced the attraction of people to go to these Christmas markets, hence the success of this beverage.

A unique tradition in each country

Today, the tradition of the Christmas markets has spread to most countries in Europe, and with it, the tradition of mulled wine. Each country has therefore developed its own method of production, adding local ingredients to the original recipe. So today you can enjoy it in several ways:

Other, more exotic recipes are also quite common:

Who consumes mulled wine the most?

As we have seen, many European countries consume mulled wine, but some more than others. The Scandinavian countries are the biggest consumers, where it is called Glögg in Sweden or Gløgg in Denmark (“heated wine”).

Mulled wine is also widespread in Germany, and in most Germanic countries, where it is called Glühwein, (“shiny wine”).

Finally, we also consume a lot of mulled wine in France, where it is traditionally flavored with cinnamon. This drink was even served in the French Alps taverns in the 19th century. Moreover, it crossed the border into Italy, where Italian bartenders used to call it “vin à la française” (French wine).

Our advice to prepare a good mulled wine at home

To prepare a good mulled wine, it’s quite simple. First of all, you have to choose the right wine. For a recipe, red wine is the best choice. Avoid tannic wines like Malbec or Mourvèdre, and choose instead a round and fruity wine, a Merlot or a Gamay. Indeed, a sweet and not very tannic wine will be more in adequacy with the other ingredients. It will also be difficult to reduce the raspy sensation of more tannic wines, if you use them.

Here is a very simple recipe:

Heat everything in a saucepan over low heat until it boils, then let it simmer for a few minutes. You will then have to filter the mixture, and it will be ready to be served.

Mulled wine can also be made with white wine, and according to some, it is even better. This white wine recipe is also famous in Alsace, a region where white wine is king. It requires using a dry white wine, such as a Pinot Blanc, mixed with oranges, lemons, cinnamon and sugar. As for the red wine, it is necessary to let the mixture simmer for a few minutes. Then serve it and taste it directly.

What to eat with mulled wine?

There is nothing better to serve with a good mulled wine than shortbread, speculoos, or a cinnamon or almond cake. Usually, we drink it outside of a meal, so it should be served with simple food.

Now that mulled wine no longer holds any secrets for you, all you have to do is gather all the ingredients and prepare it!

How to choose your decanter?