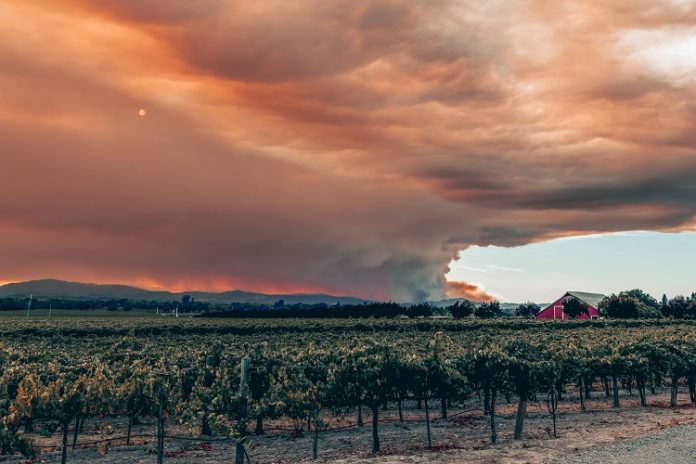 In this article, we are going to focus on a sadly actual topic: the fires that have affected the world of wine. We will see the different impacts that fires can have on vines and wine. Unfortunately, the report that we are going to draw up is rather serious…

In recent months, fires have destroyed part of the vineyards of the Napa Valley, the most famous wine region in the United States. Prestigious and magnificent estates such as Castello di Amorosa, Signorello Estate, Newton Vineyard and Château Boswell have suffered particularly virulent fires, known as “Glass Fire”. Affected by the flames, the damage was huge, both to the infrastructure and to the vines.

It will probably take decades for estates to recover from the heavy losses of this year 2020. This year, we feel as if fate is decidedly taking its toll. But more than bad luck, this issue comes up again and again every year, and in many countries. It is clear that the United States and Australia are currently paying the heaviest price.

The origins of fires

Clearly, high temperatures over a long period of time are among the conditions in which a fire can start. In an area of vegetation, with dry and sustained winds, the atmosphere becomes drier and drier. Thus, the slightest spark will cause a fire to start, which, when stirred by the winds, will very quickly become out-of-control. Every year, in France and around the world, thousands of hectares go up in smoke.

While it is obvious that fires can occur accidentally, they can also be caused by ill-intentioned individuals.  And while it is difficult to predict this type of unconscious behavior, a bit of prevention could avoid accidental fires, which are very often the result of negligence. A simple spark is enough under certain conditions. Let’s be careful not to be the cause of a fire to start!

The causes of fires

Global warming in recent years has admittedly accentuated these conditions. As average temperatures rise, the risk increases and the probabilities of fires increase.

But what are the consequences of these fires on the wine industry?

The immediate effects of fires on vineyards and wine

The immediate impact is quite obvious to draw up. All the vines that burned are dead. Those that were subjected to high temperatures will have suffered more or less. Their longevity may be altered, as well as the quality of the grapes produced.

Let’s talk about the grapes, because this is an impact that we don’t think of at first glance. In the case of large fires, significant smoke can cover a large area. Ashes and other particles are thus moved up to hundreds of kilometers. This can affect temperatures, but it is mainly the transported deposits that will have an impact on the vines.

Indeed, these particles, carried by the winds, can travel long distances to end up on the grape skins. If these are hot, they will instantly degrade the grapes. But if they are cold, they will also have a negative impact on the wine produced from that grape. Because the particles stick to the skins of the grapes, and can even pass through them!

We therefore run the risk of ending up with grapes unfit for consumption, and a wine with an unpleasant ash taste.

In addition to the vines, it is the property’s infrastructure that may have been affected by the fires, causing damage to the property, but potentially to previous vintages still in the maturing process, or even to the entire stock of wine of the property! A real disaster!

An important part of the 2019 harvest in Australia has therefore been impacted, which can be disastrous for the country’s viticulture but also for its economy.

Because Australia and the United States export millions of hectoliters of wine every year to supply some key markets around the world. The threat of not being able to fulfill the terms of their contract is therefore high, and international competition is watching…

In the long term, the effects are at least as catastrophic, if not more so.

Vines will have to be replanted, which can be absolutely disastrous for some vineyards with old vines. Australia is world famous for its century-old Shiraz vines in the Barossa Valley. There is even a classification according to their age “the Barossa Old vine charter”.

A vineyard can therefore lose more than a century of history, not to say its identity, overnight.

Cost of replanting after a fire

It will also be necessary to start from scratch, to rework the soils, to replant vines that will produce only grapes with more modest concentrations of aromas during their first years. And the irrigation systems (if there were any) will probably also have been damaged, adding a cost to the balance sheet.

The competition can (and will) take advantage of it

We have seen that the risk of losing markets is significant. This will be an opportunity for competitors to regain control and to be able to distribute the quantities that those affected are no longer able to hold. This is a particularly valid threat in high-volume markets and in our context of globalization with competition that can be particularly aggressive.

The image can suffer from this

If the producers affected are tempted to produce a wine all the same, but it turns out to be of mediocre quality (with a taste of ash for example), this could have a lasting effect on the reputation of their wines, or even of the country as a whole. Let’s remember Warren Buffet’s famous adage: “It takes 20 years to build a reputation, and five minutes to destroy it”.

The vineyards all around the world are facing many other risks, which vary as the seasons change. Climate change is disrupting things and many phenomena are increasing: frost, hail, diseases and viruses, drought, etc… The life of a vineyard is not a long quiet river and the nerves of the winegrowers are, every year, put to the test.

How to avoid fires?

Become aware of the importance of our actions

We are not going to tell you that everyone should obviously become aware of the importance of changing our behavior to limit global warming. We will be more pragmatic. Some wine-producing regions and countries are more exposed than others. And unfortunately there is no miracle solution against a fire. On the other hand, there are ways to prevent them, by banning risky practices. These things call upon our common sense and prudence; therefore, get rid of cigarettes thrown from the car, barbecues organized in hot conditions, or use a motorized vehicle in close proximity to dense vegetation during periods of extreme drought (in a forest for example).

As we have seen, fires seem inevitable. But to anticipate the losses they could cause in the vineyards, perhaps spreading vineyards in different regions could be an alternative to consider. But logistics and costs make this operation extremely complex to implement.

However, this alternative can and will make it possible to limit the damage to a part of the wine industry affected in Australia in this case. Wines produced in large volumes are based on blends from different wine-growing regions. This is the case of the famous Yellow Tail, whose success is recognized worldwide, and which has donated 1 million dollars to support its country, Australia. But it is also the case of the great American references.

On the other hand, for all designated vineyards producing very specific wines, no recourse is possible.

Once the damage has been done, we must stick together to rebuild things and help those who have lost everything. Self-help groups exist and it is in moments like these that beautiful initiatives can emerge. On-line donations are organized as well as calls for financial support.

At Aveine we have created the Collectif21 to support winemakers in promoting their products. This initiative was born during the lockdown, but we will not hesitate to repeat this kind of action and expand it as soon as the need arises. If winegrowers affected by the fires read this post, do not hesitate to contact the collective so that we can support you, because our hearts go out to you!

Netflix: which wine to drink while watching your favorite series?