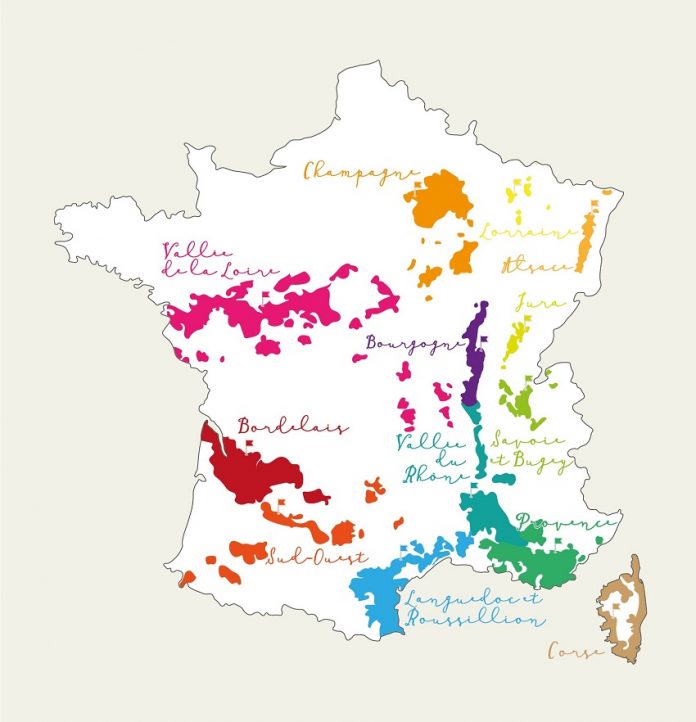 France is known throughout the world as THE country of wine. And with 750,000 hectares of vineyards, France is the 3rd largest wine-producing country in the world. This surface is spread over almost the entire French territory, and is organized into 17 wine regions. Let’s go and discover these regions.

Agriculture concerns more than half of the territory of metropolitan France. And the wine industry represents 750,000 hectares of this surface (i.e. 3% of the total surface). It is also present in 66 French departments. Moreover, 1 in 5 farms in France is a wine farm (there are about 85,000 on the French territory). With this surface area, France represents 11% of the world’s vineyards, which makes it the 3rd largest surface area behind Spain and China.

In 2019, France produced 4.2 billion liters of wine, or 17% of the world’s production. After Italy, France is the 2nd largest wine producer in the world by volume.

France is a very touristic country, and the wine industry is fully involved. Indeed, oenotourism is constantly growing. Beyond the French know-how, which attracts tourists, more than 10,000 wineries are open for visits in France. Nearly 10 million people visit them each year (40% of whom are foreign tourists).

French wine regions and their characteristics

Within these regions, some are world famous, others less so. But all of them have a particularity, a know-how and a vision of the vine. Before detailing the largest of these regions, let’s see which ones are “the most“.

The most productive: Languedoc

Languedoc wines represent nearly 5% of the world’s annual production. The southern French region has a production of over 13.6 million hectoliters per year.

26 centuries old, that is to say more than 2600 years, the vineyard of Provence was created by the Phoceans. It was then developed by the Romans in the 2nd century BC. It is from the medieval period that this region develops considerably, under the impulse of the monks and nobles of the region.

The richest (in financial value): Burgundy

In terms of value per hectare, it is Burgundy. And more precisely the hectares of Burgundy Grand Cru, which have the highest quotations, with nearly 6.25 million euros per hectare. In 2nd position, we find the appellation Bordeaux Pauillac (2.2 million euros), then Bordeaux Pomerol (1.8 million euros).

The most organic: Languedoc

In addition to being the largest and most productive, Languedoc is the French vineyard producing the most organic wines. This represents 22,000 hectares of vineyards, or 36% of French production, and 7% of world production.

The region – Champagne is known worldwide to be the perfect choice for all kinds of festive moments. Its elaboration requires patience and great financial means. This nectar demands an important workforce (for the handling of the grapes and the wine).

Fact – It is the only region to claim only one main appellation. And the only one where the combination of red and white grape wines is allowed in France. It is the monk Dom Pérignon who would have invented the method to make champagne.

To do – Visit the cellars, and understand the manufacturing process of the precious nectar.

The region – Known worldwide for its landscapes and the architecture of its houses. It is also the easternmost wine region in France. Its emblematic grape varieties such as Riesling, Gewurztraminer or Pinot Gris are references in France. Alsace enjoys a sunny climate, low rainfall and a great wealth of terroirs.

Fact – This is the great French region of white wines, with 7 referenced grape varieties.

To do – The Alsace Wine Route which winds from north to south through the hills of the vineyard, over more than 170 kilometers, at the foot of the eastern flank of the Vosges.

The region – World famous, Burgundy produces some of the most expensive wines in the world. The king grapes of Burgundy are Chardonnay and Pinot Noir.

Fact – The bottles of the Domaine de la Romanée Conti sell between 1 000€ and 10 000€, depending on the year. Most of the bottles are sold before they are produced.

To do – Visit the Hospices de Beaune and discover the great wines of Burgundy.

The region – World famous for its Beaujolais Nouveau, this wine region located north of Lyon also produces excellent wines such as Moulin à Vent, or Juliénas. The king grape variety in Beaujolais is the Gamay Noir, which constitutes nearly 97% of the production and 99% of the vineyard.

Fact – This region gathers 14 AOC (controlled designation of origin), from the classic Beaujolais Nouveau, through Beaujolais Village or Brouilly.

To do – Visit the cellars and vineyards, for example, with a magnificent view of Mont Blanc, in good weather.

The region – Divided into two wine-producing sub-regions, the northern Rhône (from Vienne to Valence) and the southern Rhône (from Montélimar to Avignon), the region is home to some fifty appellations. The most famous vintages are, for the reds, the Côte-Rôtie, the Hermitage and the Châteauneuf du Pape. For the whites, the Condrieu and the Clairette de Die.

Fact – The differences in climates within this region, with a Mediterranean climate in the south and a more continental one in the north, offer a strong diversity to the Rhone Valley. This, combined with the diversity of the soils, gives the wines from this region a very strong identity. Those of the right bank are more delicate and fruity. Those from the left bank are more robust and spicy.

The region – Historic center of wine in France, Provence is THE region for rosés. This region is divided into 3 appellations: Coteaux d’Aix-en-Provence, Coteaux Varois en Provence, and finally the largest, the Côtes de Provence appellation.

Fact – Provence produces a lot of rosé wines. They represent about 70% of its production (for 25% of red and 5% of white).

To do – Taste a Bandol rosé, a rosé wine of character, with a dark color. Or climb the Ste Victoire mountain, painted by the greatest masters.

The region – Corsica has nine AOC (controlled designation of origin) since 1975. Corsican winegrowers have developed over time quality wines and have gained in precision and style.

Fact – Organized by the Greeks, then developed by the Romans, the Corsican vineyard is one of the oldest in France.

To do – Discover the different panoramas of the vineyards, sometimes mountainous, sometimes Mediterranean.

The region – As we said, Languedoc is the largest wine-producing region in France in terms of surface area and is also one of the most productive regions in the world.

Fact – Languedoc-Roussillon is located in a Mediterranean climate zone, characterized by mild winters, hot and dry summers and low rainfall. It is therefore a perfect region for growing vines. But this advantage was not always an asset. And its wines were long considered to be of low quality.

To do – Enjoy a good glass of Roussanne (typical white grape variety of the Languedoc), in the vineyards overlooking the sea.

The region – Located on the right and left banks of the Gironde River, the Bordeaux vineyard represents the largest AOC (controlled designation of origin) vineyard in France. On the one hand, the main red grape varieties of the region are Merlot, Cabernet-Sauvignon and Cabernet Franc. On the other hand, the three white grape varieties are Semillon, Sauvignon and Muscadelle.

To do – Visit the châteaux of Bordeaux (Pétrus, Yquem, Margaux or Latour). Then discover the Cité du Vin, in Bordeaux.

The region – There is something for everyone in the Loire. The region produces red, white, rosé, dry, sweet and even sparkling wines. All the wines of this region have in common a character marked by freshness, vivacity and elegance.

Fact – A very friendly region, it is the first in the ranking in terms of quality of hosting visitors, according to a survey comparing the capacity of hospitality, infrastructure and customer feedback.

To do – Take advantage of your stay to walk the 1,000km of vineyards along the Loire River, then discover the wonderful castles that border it.

We hope this article has given you some vacation inspiration and ideas! And remember to take your Aveine aerator to make the most of all your tastings!

Wines for a party: how to choose?