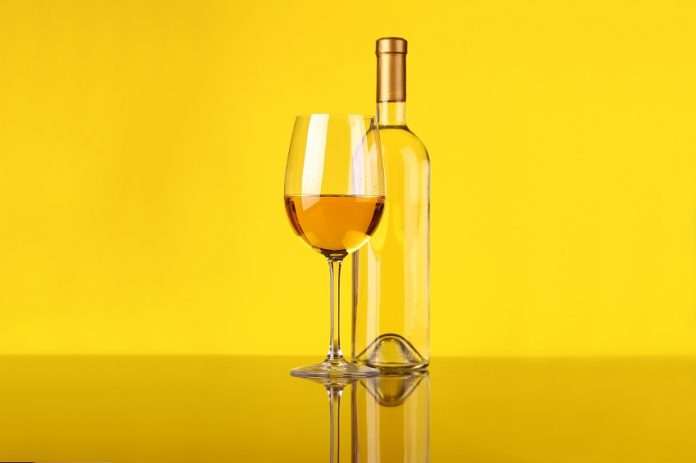 Considered as one of the greatest wines in the world, the yellow wine owes its fame to its method of production, which gives it such a particular taste and character. Originally from Château-Chalon, it is produced only in the Jura, and is one of its flagship wines. Between manufacturing and aging methods, history and tasting, let’s discover the one nicknamed “the gold of the Jura“.

The origins of yellow wine

It owes its fame to its particular taste and its unique and mysterious process of elaboration. It is also called “vin de voile” (“veil wine”) or “vin de l’oubli”(“forgetfulness wine”). The yellow wine is, of course, not to be confused with the orange wine.

Its origin is quite mysterious. It is said that its creation would be, as often, the fruit of chance. Indeed, a winegrower would have forgotten a barrel at the bottom of his cellar, and would have had the surprise to bring out a golden juice a few years later. The yellow wine and its legend were born.

A wine from Jura

AOCs Arbois, Côtes du Jura, Château-Chalon and Etoile are the only ones authorized to produce it.

The climate where Savagnin is grown is called semi-mountainous. It is characterized by harsh winters and dry summers, with strong variability both within a season and from one year to the next.

Winemakers harvest the Savagnin usually in the second half of October. The grapes are picked up very ripe, even with noble rot.

The production of yellow wine represents only 3.5% of the wines produced in the Jura, which is a region with multiple appellations and great wines.

Its uniqueness is due to its very particular production process. After fermentation, the wine is kept for six years and three months (75 months) in oak barrels without topping up the part of the wine that evaporates, better known as the “angels’ share”. A film of yeast will then form on the surface of the beverage, preserving it from oxidation by avoiding direct contact with the air. This is what gives the particular aromas of yellow wine.

Yellow wine also has its specificity when it comes to bottling. The clavelin is the only authorized bottle shape. This bottle was created in the 18th century at the request of the Jura winegrowers. This bottle contains 62 cl of wine, which is what remains of a liter of wine after it has aged.

It’s such a special wine that even Louis Pasteur took an interest in it. A native of the Jura region and a wine lover, the man who would become the inventor of the rabies vaccine studied the conservation of wines, and in particular that of yellow wine. His work focused on the resistance of this wine during its maturation in barrels. It was he who demonstrated the link between the veil of yeast on the surface of wine and its exceptional capacity for conservation.

The tradition of yellow wine is strong in the Jura, and its inhabitants are proud of it. Every first weekend of February, since 1996, nearly 40,000 wine lovers gather to celebrate the “Percée du Vin Jaune”. It is the celebration of the tapping of the first barrels of wine, after 6 years and 3 months of aging. On the program of these festivities: parades, ceremonies, meetings, visits of the domains, sommelier contest and many other activities.

Each of the yellow wine producing towns takes turns to organize this event every year.

How to taste yellow wine

In terms of tasting, once again, this wine will surprise you. Visually, the color of the wine is golden, glossy and quite clear.

On the nose, the wine is quite intense. It expresses itself through aromas of fresh nuts, dried fruits and sweet spices with delicate floral notes. In the mouth, it is rich, powerful and dry. It is a wine with a rather balanced structure, with aromas of nuts, green apple and spicy notes. The aroma of yellow wine is due to a chemical compound called sotolon. This is what gives it the aroma of nuts.

In terms of food and wine pairing, it is both an aperitif wine and a wine that can accompany a meal. It is a particular wine, which does not go with everything. The culinary options to accompany this wine must be precise and well chosen.

It goes perfectly with foie gras, shellfish or poultry in cream sauce. Yellow wine also goes very well with the cheeses of its region such as the ripened comté, the morbier or the mont d’or. It is also used a lot in cooking, especially in the conception of Franc-Comtois specialties, such as coq au vin jaune or trout in yellow wine.

The yellow wine should be consumed at around 15°C or 16°C.

It is recommended to open the wine before tasting it, to avoid it being too strong in the mouth. If you open a bottle at the last moment, the Aveine aerator is the best solution to discover the specificities of your yellow wine, perfectly oxygenated. Indeed, this wine is not afraid of oxidation, so it can be kept for a few days without any problem. Having spent more than 6 years in contact with the air, a few more days won’t scare it away!

The yellow wine is a wine with a great ageing potential, and whose qualities are still exceptional after many years. For example, a bottle of the 1774 vintage was uncorked in 1994, and proved to be remarkably long-lasting. On average, a bottle of yellow wine can be kept for 30 years.

How to use a wine decanter?

What is the place of wine in China?