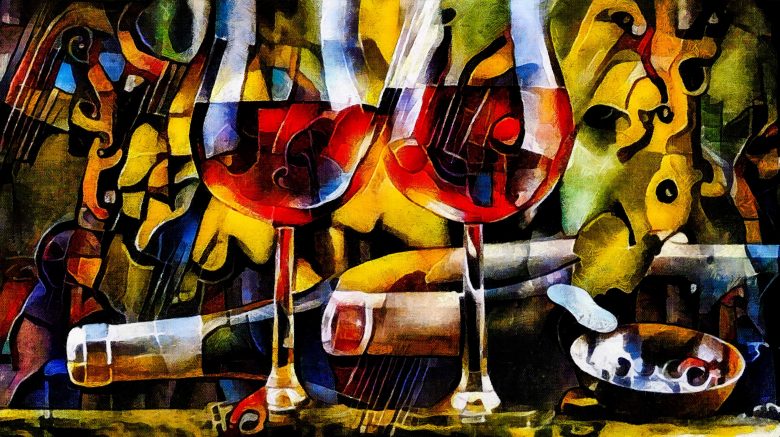 The 1955 wine label is for us one of the most emblematic of the château Mouton-Rothschild. George Braque, the main initiator of cubism with Picasso, was the one in charge of it. Made to the exact size of the label, his work celebrates a magnificent vintage with great simplicity. Because when wine is so good, it becomes so simple.

The great master of surrealism Salvador Dali illustrates the 1958 Mouton-Rothschild wine label. This legendary 20th century artist proposes a gentle sheep with a childlike look, echoing the name of the castle.

The Catalan Juan Miro is in charge of the 1969 Mouton Rothschild wine label! In the center, a large blood-red grape berry. In the left corner, a “greeting to the colours”. And above all, blue and yellow colours, symbol of the Rothschild family.

In 1973, Pablo Picasso died. Baron Philippe de Rothschild then decided to pay tribute to him. He will use a Picasso painting from his personal collection for this year’s label. The work is accompanied by these words: “in homage to Picasso (1881-1973)”.

Andy Warhol, an emblematic figure of Pop-Art, is in charge of the 1975 Mouton-Rothschild wine label. Faithful to his habit of diverting classical photos, he juxtaposes here a portrait of Baron Philippe de Rothschild in different positions.

In 2004, we celebrated the centenary of the Entente Cordiale, between Great Britain and France. In this respect, it is an Englishman who has the privilege of drawing the label for that year. And not just anyone. Indeed, to echo the role played by King Edward VII in this agreement, Mouton-Rothschild entrusted a member of the royal family with the illustration: Prince Charles.

The American sculptor Jeff Koons, a star of contemporary art, is in charge of illustrating the 2010 vintage. He proposes a rework of the Birth of Venus. Indeed, it is transformed into Venus at the Vessel.

Here are some of the most emblematic labels of the castle. You can find them all on the Mouton-Rothschild website.

What is the place of wine in China?

Christmas food and wine pairings around the world

Wine Aerator: we explain everything